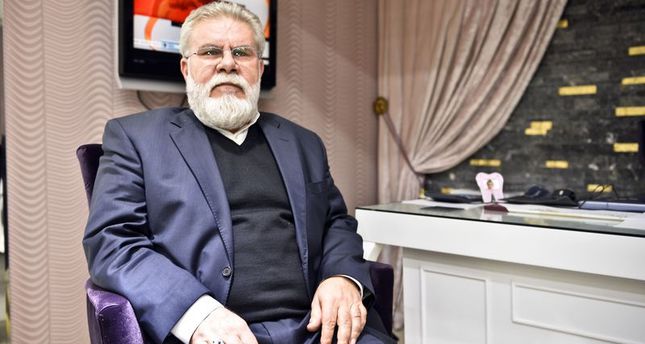 by Daily Sabah Dec 16, 2014 12:00 am
Mehmet Nuri Turan, the former owner of the Tahşiye Publication Company, has said that his letter of complaint to the police initiated the Dec. 14 operation and that he was imprisoned without reason for 17 months. He also noted that his previous letter of complaint to the Istanbul Police Chief, sent in 2011, was disregarded by officers allegedly tied to the Gülen Movement.

Turan said that he established the Tahşiye Publication Company in 2004 and owned it until 2012. He explained that the former lawsuit process was initiated in April 2009 when Fethullah Gülen, who currently lives in the U.S. in self-imposed exile, made statements about the Tahşiye group.

Turan claimed that "an investigation was launched without any warning or complaints," and that a fabricated complaint report was submitted by members of the Gülen Movement in September 2009. He said that he wrote a letter to Hüseyin Çapkın, the chief of the Istanbul Police Department at the time but he did not put it into operation. Turan claimed the reason behind the disregard was intentional and due to the fact that the officers taking care of the issue were supporters of the Gülen Movement.

Ali Fuat Yılmazer, who was the head of the intelligence department of the police at the time, had submitted a report to the police department claiming that the Tahşiye group supports a number of terrorist organizations including al-Qaida, the Turkish Hizbullah and Islamic Great East Raiders Front (İBDA-C) according to Turan. He highlighted that all three of these organizations had remarkably different ideologies and that the court had issued a wiretapping order as the case proceeded under the name the Radical Tahşiye Group. The name was later changed to the Radical Mehmet Doğan Group shortly after it was discovered that Tahşiye is a registered trademark.

Turan said that he was detained on Jan. 22, 2010, and two registered guns belonging to him were confiscated and still remain at the property and evidence unit of the police. "On the same day 2.5 hand grenades [ three hand grenades one of which was not fully functional] were found in an unknown house and were used as evidence to prove that we were a criminal organization," Turan said. The forensics report also confirmed that 2.5 grenades had been found. Turan explained that later inspections had revealed that the hand grenades had fingerprints of police officers with supposed ties to the Gülen Movement and resulted in a 17-month long prison term for him.

Mehmet Doğan, who is also known as "Mullah Muhammed," was allegedly against some of the ideologies of Fethullah Gülen, the leader of the Gülen Movement. Turan claimed that Doğan was tried as the number one suspect in the case and was seen as the second most important suspect among 40 people in total. Fourteen people were arrested and nine were released after the first trial that took place in September 2010. Turan said he was released in May 2011, but the case is still proceeding and there will be a hearing on March 5, 2015.

Turan said that he wrote an email to the police department in the spring of 2014 asking about the condition of his letter and why it was not pursued in accordance with the law. "The police department invited me to give testimony and I expressed that I would like to be a plaintiff," Turan said, highlighting that he had filed a direct complaint about Gülen and called for those who cooperated with him to stand trial.

"I filed a complaint about everyone who was responsible for unfairly and unlawfully imprisoning us at the time," Turan said.

The Tahşiye group is known to be a branch of the Nur Movement. The group and its leader, Mehmet Doğan, a former imam, are known for their opposition to the Gülen Movement and have a firmer stance against interfaith dialogue compared to other movements.

Prior to the operation, in a speech on April 6, 2009, Gülen denounced the Tahşiye group by saying the group would be used by domestic and international powers as a tool to threaten national security, similar to the Turkish Hezbollah of the 1990s and al-Qaida.

Following Gülen's speech, Zaman daily made references to the issue on its pages along with other media outlets close to the movement while the Gülen Movement-affiliated channel Samanyolu TV depicted the Tahşiye group as a terrorist organization in the television series "Tek Türkiye" (One Turkey).

All those detained are allegedly linked with Gülen and the Gülen Movement. Zaman newspaper is also affiliated with the movement.