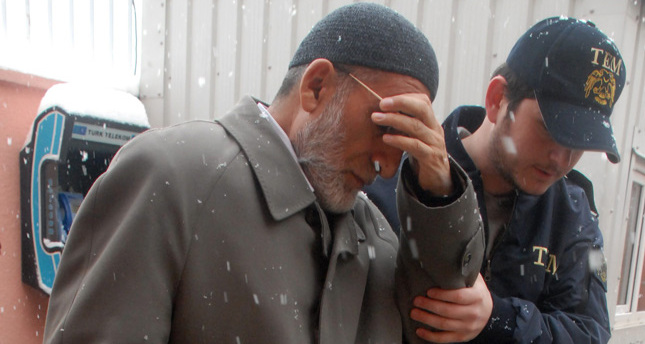 Spurious allegations and forged evidence were used by the Gülen Movement to destroy a rival group, says businessman Hüseyin Büyükfırat, widely seen as a supporter of the so-called Tahşiye group

Businessman Hüseyin Büyükfırat, who is said to be a financer of the so-called Tahşiye group, said contrary to claims by the Gülen Movement, there is no organization called "Tahşiye" and that the movement tries to eliminate anyone who comes in their way. Almost a year after the Gülen Movement's alleged attempt to overthrow the government through members in the judiciary and police force, a prosecutor issued detention warrants for 31 people with alleged ties to the Gülen Movement concerning their pursuit to crush a rival religious group through illegal means. Dozens of people, including police officers and media staff with alleged links to the Gülen Movement, were detained by an Istanbul prosecutor on Sunday. According to the prosecutor's statements, the raids were carried out for involvement in establishing an armed terrorist organization and fabrication of crimes under the scope of a terrorist organization.

Büyükfırat said that Tahşiye is in fact the name of the publisher that prints the work of Mehmet Doğan, who refutes U.S.-based imam Fethullah Gülen's claims of following the path of respected, late Islamic scholar Bediüzzaman Said Nursi.

In a leaked telephone conversation early this year, Gülen is heard discussing a controversial television series with a senior member of the movement. Gülen's direct involvement in the series brought allegations that he became directly involved in portraying the Tahşiye group as a terrorist organization in a television series. Doğan's imprisonment came after Gülen hinted in one of his lectures that there could be a terrorist organization named "Tahşiye," and later a Gülen-linked television channel broadcast a series in which a terrorist organization with the name Tahşiye was portrayed. Later, dozens of Tahşiye group members were detained and some were sent to prison, but later released. The Gülen Movement is accused of conducting the anti-Tahşiye operation with their members in the police department.

"This publishing house was then portrayed as a terrorist organization. There is no other company with the name 'Tahşiye' in Turkey. So it was a direct target. In the 63rd episode of the series, [the name] Tahşiye is heard. Later in the 66th episode, they say 'Tahşiye is now uncovered, let's start calling this organization, Rahle.' Rahle Publishing is the other publishing house affiliated with Doğan," Büyükfırat said.

During the raids in which 122 people with alleged links to Doğan were detained, a total of 24 people were sent behind bars, but were released after 17 months. Documents showing forensic investigation of the three hand grenades found during the raids had the finger prints of three police officers who are allegedly members of the Gülen Movement.

Istanbul University's dean of the Law Faculty, Professor Adem Sözüer, said the expert report given to court shows that the police unit that carried out the raid had not followed the law. "Evidence found through unlawful ways cannot be accepted by the law. According to the law, there has to be a witness present when conducting a search at a place and there was no video shot during the raid. Also, on the hand grenades, there were only fingerprints of the police officers who conducted the raid. There are serious doubts that the officers may have placed the hand grenades in the house when they started the raid," Sözüer said.