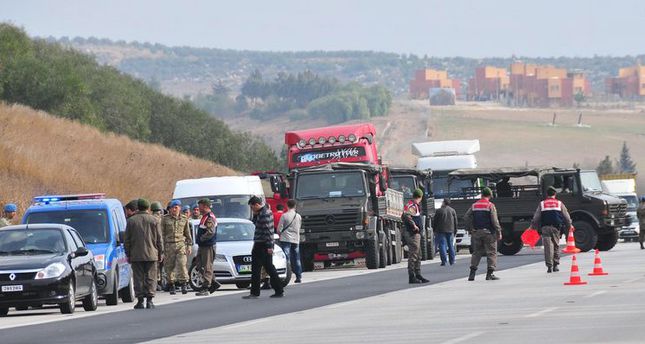 by Daily Sabah Dec 16, 2014 12:00 am
In addition to the current 13 suspects, the Adana Public Prosecutor's Office has filed a public complaint against 19 others on charges of stopping and raiding trucks belonging to the National Intelligence Organization (MİT) in Adana on Jan. 19, 2014.

Furthermore, the Supreme Board of Prosecutors and Judges (HSYK) recently gave permission to launch an investigation into the commanders who stopped and searched the truck. It is claimed that MİT officials were physically harassed in a degrading manner during the incident.

Colonel Özkan Çokay and two local generals from the Adana Provincial Gendarmerie Command were discharged following the incident due to charges of insubordination when they ordered officers to stop and inspect MİT trucks. The trucks were searched for explosives belonging to a terrorist organization, which they were allegedly carrying – a claim that has caused significant controversy as the state official said the trucks were carrying aid to war-stricken Syrian Turkmens. The truck searches were reportedly carried out by alleged members of the Gülen Movement in the judiciary and army.

A total of 13 officials faced charges following the incident but a ruling from the HSYK was needed to charge Çokay and the local generals involved in the incident. The indictment was accepted in May 2014 but the HSYK's previous members did not give permission to launch an investigation into the generals.

Critics of the incident have claimed that it was planned and administered by members of the Gülen Movement within the security forces. It was reported that Çokay met with Adana Public Prosecutor Aziz Takçı in his house hours before the raid. Çokay reportedly went to the prosecutor's office to coordinate the operation and requested a search warrant even though it was his day off.

On Jan.19, 2014, MİT officials were assaulted and handcuffed as though they were terrorists, contrary to the law and outside authoritative boundaries. The government has reformed its intelligence laws in efforts to avoid such circumstances in the future.