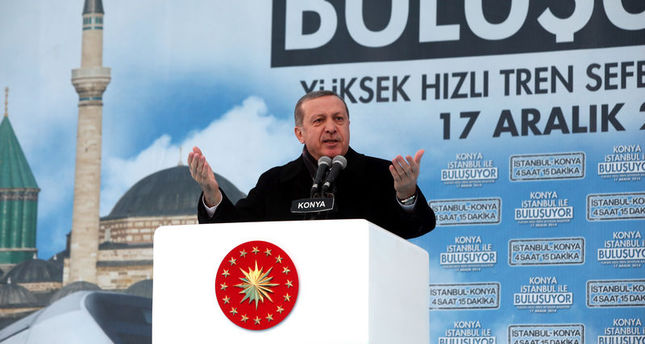 by Daily Sabah Dec 17, 2014 12:00 am
President Recep Tayyip Erdoğan, in response to Fethullah Gülen, who spoke in support of those detained in the investigation into the alleged members of the Gülen Movement for "fabricating crimes" and "slander," called on the leader of the movement to come to Turkey if he wanted to "join those detained."

Gülen, who lives in self-imposed exile in the U.S., in a sermon he delivered following the Dec. 14 operation in which 27 suspects were detained on allegations of taking part in setting a plot against a rival group that Gülen called the Tahşiye group, said those who are in custody are kind-hearted and spiritually elevated people.

Responding to Gülen, who said everyone would like to be in their shoes, Erdoğan said there was no obstruction that keeps him from joining those detained.

Gülen, being on the top of the pyramid for the alleged crime, did not have an arrest warrant issued against him as he currently lives abroad. However, reportedly on the agenda as part of the Dec. 14 Tahşiye case operation, is the possibility of Ankara asking Interpol to issue a Red Notice for him.
Last Update: Dec 18, 2014 8:47 am
RELATED TOPICS