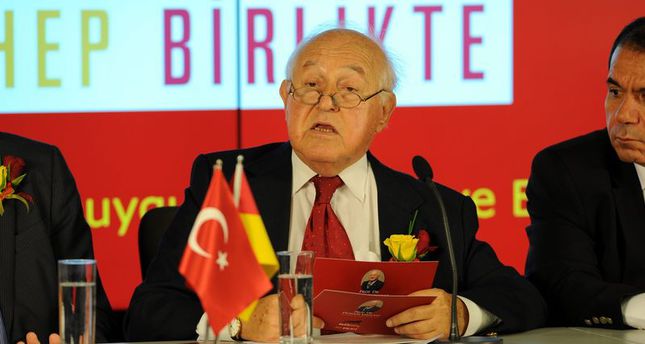 by Daily Sabah Dec 17, 2014 12:00 am
Chairman of the Galatasaray Football Club, Duygun Yarsuvat has claimed that Pennsylvania-based imam Fethullah Gülen asked for a $50 million bribe from the former chairman of Fenerbahçe Football Club, Aziz Yıldırım, and after he refused, began the match-fixing which led Yıldırım to prison.

"Fethullah [Gülen] asked for $50 million from Aziz Yıldırım. Neither Aziz Yıldırım nor Fenerbahçe paid the money. A well-known process started after all of this. … This process has not ended yet," Galatasaray Chairman DoygunYarsuvat told Turkish daily Milliyet on Wednesday.

In the summer of 2011 a comprehensive investigation was launched into allegations of match fixing and organized crime networks in Turkish soccer circles. More than 60 people, including Fenerbahçe club chairman, Yıldırım, were taken into custody. On July 14, 2011, Hüseyin Gülerce, a senior journalist associated with the Gülen Movement, wrote about the match-fixing arrests in Today's Zaman, the English language version of Zaman daily. In an article titled, "Second breach in Ergenekon's fortress," Gülerce described the match-fixing investigation as part of a concerted attempt to destroy the same people who had been targeted in the Ergenekon investigation. "As they fail to understand that their resistance is futile, they will be eliminated faster," Gülerce predicted.

On July 2, 2012, Turkey's now defunct Specially Authorized Courts convicted and sentenced Yıldırım to six years and three months in prison for match fixing. On June 7, 2014, the newly assigned prosecutor of the match-fixing scandal demanded a retrial for Yıldırım from the 13th High Criminal Court, which is the newly assigned court for the match-fixing scandal. Immediately after his release from jail on July 2, 2013, he spoke to Hürriyet columnist Ertuğrul Özkök and said that the Gülen Movement was responsible for all of these matters.

Furthermore, on January 20, 2014, Yıldırım claimed to The Wall Street Journal that the evidence of the match-fixing case was fake and unstable and that the Gülen Movement was behind it. "The match-fixing case was a political trial with a political verdict. I don't respect the decision of this judiciary," he said. He had been the head of Fenerbahçe since 1998 and won five Turkish league titles.

"Prime Minister Recep Tayyip Erdoğan, in his statement on December 17, said that a parallel structure exists. This parallel structure is run by Gülen and his community. All those prosecutors, judges and police officers were removed from office because they are Gülenists. … So, it means that all those operations in the past, including the one against us, were the work of the Gülen Movement. I cannot be sure now whether the Appeals Court judges [who upheld my sentence] are in the service of the parallel structure or the Republic of Turkey. The justice minister should make a statement to shed light on the situation," Yıldırım said.

On June 7, 2014, the newly assigned prosecutor of the match-fixing scandal demanded a retrial of the case, which was accepted by the court and will lead to all those convicted, including Yıldırım, to have a retrial.