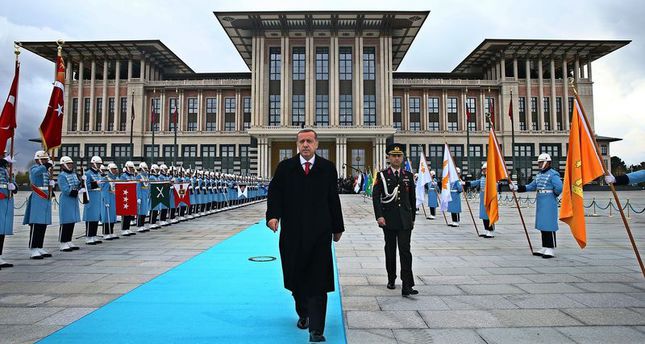 by AA Dec 17, 2014 12:00 am
It is 2013 and then Turkish Prime Minister Recep Tayyip Erdoğan raises eyebrows when he stoops to pick up a Turkish flag left on the floor as a marker during a G20 leaders' photo shoot in St. Petersburg.

A year before that, Erdoğan was the only national leader to rescue his flag from the floor during another G20 meeting in Los Cabos, Mexico.

From prime ministers downwards, national symbols hold high importance for Turkish people but, surprisingly, the country lacks a crucial emblem which has been missing since the Republic's foundation in 1923: a coat of arms.

This leaves Turkey and the Dominican Republic as the only states worldwide to lack such a national emblem.

Now, some 90 years later, the Turkish government has decided to revive the issue amid intense debate and discussion over re-branding the country and bridging the gap between new Turkey and its Ottoman past.

On 9 September 1925, two years after the collapse of Ottoman Empire, the Turkish government launched a contest for the country's new state emblem. A year-long effort resulted in choosing a simple design containing a wolf-a revered animal for Turkic people-plus the traditional star-and-crescent.

However, founder of the Republic, Mustafa Kemal (Atatürk), disliked the design thereby sealing its fate and leaving the state without an emblem.

Now, a new proposed bill in Turkey's parliament claims that a state emblem is an important symbol for every country and calls for a commission to design a new one.

"It is like Turkey does not have half of its symbol. Turkey, as a country which has one of the world's most-established heritages, should have a state emblem to display that legacy," she says.

Ancient Turkish states used various animal figures such as wolves and eagles as emblems. "Animal predators used as symbols by Turkish clans were regarded with respect," according to Selçuk Mülayim, an art historian at Istanbul's Marmara University, writing in Islam Encyclopedia.

Ottomans used the Sultan's signature, rather than animal figures to represent the state. "Tuğra", a signature of an Ottoman sultan which includes a ruler's name and his title, was used extensively.

"Tuğra functioned as a signature of the sultan, a symbol of dynasty and a state emblem at the same time," says Mustafa ÖztÜrk, writing in his work "Ottomans' Coat of Arms", adding that the tughra lost its function as state emblem in the final century of imperial rule.

As a result of Westernization around the globe, a coat of arms has become an international norm just like "institutions and constitutional structure," says Selman Can, assistant professor of art history at Marmara University, implying that it necessities a state emblem similar to those found in Western countries.

Although Ottoman rulers used a variety of symbols, adopting an official emblem was a 19th century project. The empire's first coat of arms was designed and sent to Istanbul for approval in 1857 by Sir Charles Young, an English officer, Can says.

"Coat of arms is a product of Western state structure. We have symbols that represent states, however those were not coat of arms," he stresses.

From the start, the emblem was used for diplomatic purposes, branding the empire for an external audience. Sir Charles was tasked with creating a state emblem for the empire so that that the symbol could be hung in St. George's Chapel in Windsor Castle, England, in exchange for the Order of the Garter (knighthood), presented by Queen Victoria to Ottoman Sultan Abdulaziz in 1867, Can says.

Abdul Hamid II, 34th Sultan of the Ottoman Empire, added new military symbols-including swords, rifles, and cannons-and finalized the seal. "This emblem was hung in many places and was used extensively," Can says.

After the foundation of modern Turkey, that emblem was abolished. Turkish deputies have now proposed the formation of a commission to choose a coat of arms. However, the bill does not specify how the process will proceed.

Deputy Uslu is open to an idea of contest, adding, though, that it is up to a parliamentary commission to decide on how to proceed.

"We will fill a big gap after having an emblem. Following that we will carry this emblem with honor in our passports," she added.

"Designing an emblem is a scientific job. Every symbol within the emblem means something. So we need a contest for a state emblem," Can said.

At a time of debate about the character of the Turkish state and whether it should face East of West, it will be heavy burden to come up with an emblem that can embody the Turkish people's history and aspirations.