12 Gülenist suspects referred to court with an arrest demand 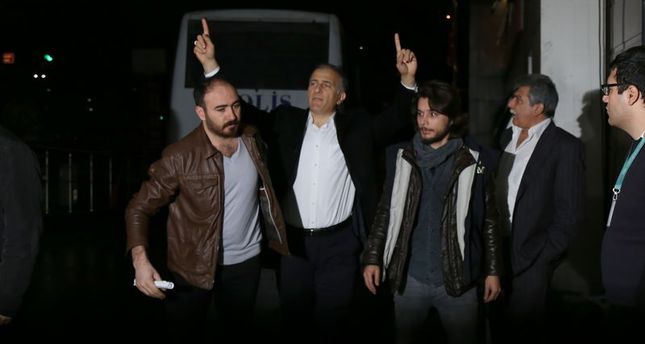 by Daily Sabah Dec 18, 2014 12:00 am
12 out of 16 Gülenist suspects detained under the scope of the December 14 Tahşiye case, including Ekrem Dumanlı and Hidayet Karaca, were referred to court with a demand for their arrest on Thursday.

Ekrem Dumanlı is reportedly facing charges of being a member of a terrorist organization as part of the investigation into 'Tahşiye' case.

The prosecutor's office demanded release of four of the suspects on condition that they are regularly controled by judicial institutions to prevent suspects from leaving the country.

The suspects who allegedly have ties with the Gülen Movement including Ekrem Dumanlı, the editor-in-chief of Zaman Daily and Hidayet Karaca, the president of Samanyolu Broadcasting were sent to the Çağlayan Courthouse on Thursday morning.

The suspects were held at the Vatan compound of Istanbul Security Directorate and were transferred to the hospital for a health checkup.

Istanbul Chief Public Prosecutor Hadi Salihoğlu said on Sunday that he had ordered the detention of 31 suspects on charges of forgery, fabricating evidence and forming a crime syndicate to overtake the sovereignty of the state. All those detained are allegedly linked with Gülen and the Gülen Movement. Zaman newspaper is also affiliated with the movement.

In addition, Hüseyin Gülerce, a former columnist of Zaman daily, which is allegedly linked to Fethullah Gülen, who lives in self-imposed exile was released after three hours of questioning, according to security officials.