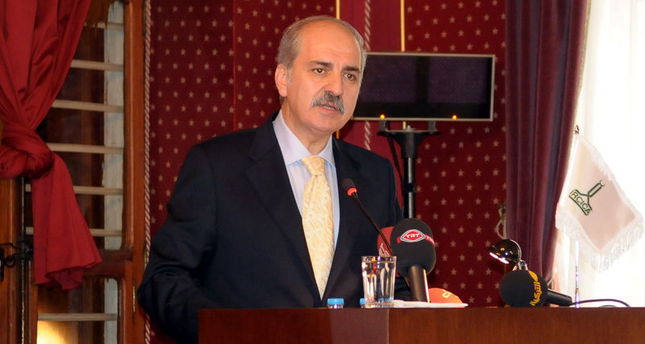 by Daily Sabah Dec 18, 2014 12:00 am
Deputy Prime Minister Numan Kurtulmuş dismissed allegations circulating in media that the government has a hand in the operation that was launched on Sunday as part of an investigation conducted by the Istanbul Public Prosecutor's Office as "unfair."

Kurtulmuş said the Dec. 14 operation was a result of an investigation into suspects accused of "fabricating a crime" and "slander" conducted by a prosecutor's office. He said that the government cannot be involved in the case, as the process, he said, regards the law, not politics.

"The process concerns laws and is not political. The government neither participates in nor influences the process." Kurtulmuş said, speaking live on a private TV channel in a question and answer session with journalists.

Istanbul Chief Public Prosecutor Hadi Salihoğlu said on Sunday that he ordered the detention of 31 people on charges of forgery, fabricating evidence and forming a crime syndicate to overtake the sovereignty of the state. Already, 16 out of 30 of those detained have been released and one could not be detained as he was abroad on the day the operation took place.

Alluding to the investigation that was launched after a criminal complaint was filed against the suspects for their alleged involvement in a plot against a group they deemed a rival that led to their imprisonment, Kurtulmuş said the investigation was not about the "media."

"Some members of media outlets were detained as part of the operation, but the crime they are accused of does not concern an activity they are engaged in as journalists. Whatever the claim targeting them is, the issue is an individual case," Kurtulmuş also said.

He also said that government officials, just like the rest of society, knew about the incident following the outbreak of the operation.

"All the political parties including the AK Party [Justice and Development Party] should watch the process without treating the subject as a judge or a prosecutor," Kurtulmuş was quoted as saying.

Contrary to the picture circles close to the Gülen Movement want to draw of the operation that targeted them, as a blow to freedom of the press, the investigation targeted police officers as well as members of the media close to the movement, who allegedly participated in fabricating a crime against a group that they deemed a threat.

"If we are to talk about a parallel structure within the state, it is apparent that it has extensions," Kurtulmuş said, adding that the fight against the "parallel structure" does not cover an incident that concerns the law.

"It being portrayed as such is unfair," Kurtulmuş said.