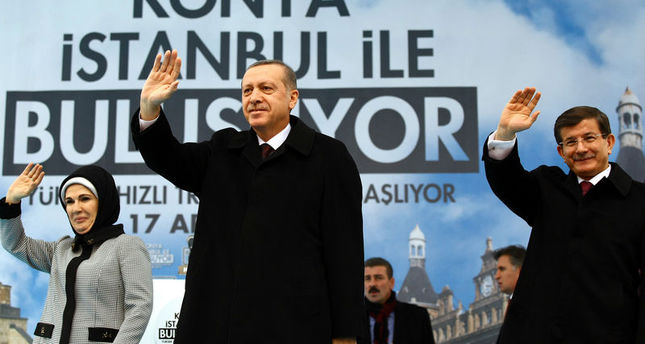 by Daily Sabah Dec 18, 2014 12:00 am
Islamic scholar Mevlana Rumi had warned people against fake religious leaders wearing masks, said President Erdoğan on Wednesday during the commemoration ceremony held for the scholar in the central province of Konya.

President Recep Tayyip Erdoğan was in Konya on Dec. 17, the last day of the commemorations of the prominent 13th century scholar and poet, Mevlana Celaleddin Rumi.

"There are such scholars whose works are timeless and who are not forgotten even after centuries; however, there are also those wearing scholar-masks, who give themselves away," Erdoğan said during his speech.

The ones wearing scholar-masks disgrace themselves, whereas those who follow them blind-folded - without paying attention to Mevlana's warnings - experience disappointment, according to Erdoğan.

Erdoğan has also touched upon the issue of polarization between people during his speech. Even if people's ideas, religious, beliefs, sects differ from one another, they should not lose their respect for each other, he said. "Following autumn, following a defoliation season which lasted a long period, we are preparing for a new spring, a new awakening, with the new Turkey," Erdoğan said.

He said, he hopes the coming spring will end the old disputes in Turkey and take the country out of darkness into the light. This spring will see the start of the normalization process in Turkey, with every part and institution of society affected by it, Erdoğan said.

Polarization in society is not beneficial for anyone, according to Erdoğan. "We should now be focused on finding solutions to the problems of yesterday," he said. The new Turkey will come up with a new discourse, in line with that of Mevlana, Erdoğan added.