Script on organization was given ready for broadcast, say scriptwriters 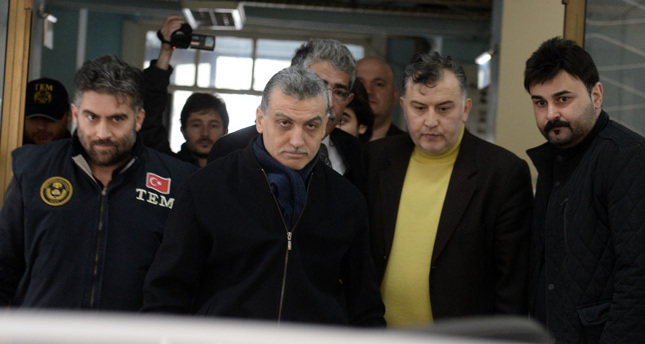 by Daily Sabah Dec 18, 2014 12:00 am
In testimony given as part of the December 14 operation launched against media staffers and police officers for allegedly cooperating to fabricate a crime that targeted a group they call the Tahşiye group, director of the "Tek Türkiye" (One Turkey) series screened on Samanyolu TV, Naci Çelik Berksoy confessed that they did not write the script of the scenario for the "Karanlık Kurul" (The Dark Council) episode of the series by saying that scripts were given to them as a ready package to broadcast and asserted that they only inserted it into the series.

Radiye Ebru Şenvardar and Elif Yılmaz, the two detainees who were identified as scriptwriters but are actually stage workers, said that the detained scriptwriters only write the main structure of the series and added, "From time to time, producers make some additions in the scenario without our knowledge." The two detainees were released following their testimony.

Scriptwriters Ali Kara and Samim Noyan asserted that all characters and incidents depicted in the series are fictional and were released following their testimony. The producers, who allegedly added parts to the series as the scriptwriters asserted, denied the accusation. The detained who worked on the "Tek Türkiye" set were facing charges of writing the Tahşiye group into the script and labeling it a terrorist group. Allegedly, the "Karanlık Kurul" episode broadcast on the same Gülen Movement-linked channel, did the same.

Backing the allegations, Gülen Movement-linked Zaman daily writer Ali Ünal mentioned in an article published two days after the December 14 operation that the television series on Samanyolu TV raise awareness of terrorism in the public, intentionally or unintentionally. By saying so, he said the series had the purpose of creating a perception, which they intended to impose on the public.

An audio recording was leaked early this year of a conversation with Fethullah Gülen, the Gülen Movement leader living in the U.S. in self-imposed exile, approving the scripts read by the president of Samanyolu Broadcasting Group, Hidayet Karaca, who was detained on Sunday for the "Şefkat Tepe" (Compassion Hill) television series on Samanyolu TV. In the leaked audio recording, Karaca asked Gülen for a "Karanlık Kurul" in the upcoming "Şefkat Tepe" episode and Gülen replied: "I think it will be good. … I mean, in a way that will reflect that thing."

Istanbul Chief Public Prosecutor Hadi Salihoğlu said on Sunday that he had ordered the detention of 31 suspects on charges of forgery, fabricating evidence and forming a crime syndicate to overtake the sovereignty of the state. All those detained are allegedly linked with Gülen and the Gülen Movement. Zaman newspaper is also affiliated with the movement.

The Tahşiye group is known to be a branch of the Nur Movement. The group and its leader, Mehmet Doğan, a former imam, are known for their opposition to the Gülen Movement and have a firmer stance against interfaith dialogue compared to other movements. Prior to the operation, in a speech on April 6, 2009, Gülen denounced the Tahşiye group by saying the group would be used by domestic and international powers as a tool to threaten national security, similar to the Turkish Hezbollah of the 1990s and al-Qaida.

Following Gülen's speech, Zaman made references to the issue along with other media outlets close to the movement while Samanyolu TV depicted the Tahşiye group as a terrorist organization in "Tek Türkiye." In 2010, an operation was carried out against the Tahşiye group and a total of 11 people were detained. Mehmet Doğan, the head of the group, was imprisoned for 17 months. Doğan, who is also known as "Mullah Muhammet," opposes some of the ideologies of Gülen.