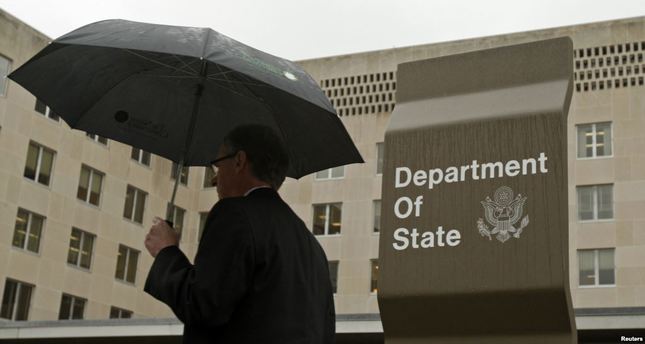 by Ragıp Soylu Dec 18, 2014 12:00 am
A Turkey-based religious group referred to as Tahşiye has no links to terrorist al-Qaida, a U.S. State Department official said yesterday. The Tahşiye group was attacked by the Gülen Movement for its opposition to Fethullah Gülen, the movement's U.S.-based leader, and several members were imprisoned in 2010 for al-Qaida affiliation, before being released.

The official, speaking to Daily Sabah on the condition of anonymity, made a brief statement concerning the Tahşiye group, which largely supports the then-U.S. Ambassador to Turkey's telegram published by WikiLeaks, saying the group had no links with the terrorist group. A telegram dated January 2010 says that contrary to Turkish press reports and police contacts assessments, the suspects are not actually believed to have ties to al-Qaida.

"Al-Qaida is being used by the media and police as a catch-all term for suspected Islamic extremists regardless of organizational affiliation, or whether they have an organizational affiliation," the telegram noted. James Jeffrey, the then American Ambassador to Turkey, refused to comment on the case and stated that U.S. government policy prohibited U.S. officials and former officials from commenting on WikiLeaks materials.

After spending more than a year in prison, Tahşiye members filed a complaint of wrongful imprisonment. Last Sunday's detentions ordered by an Istanbul prosecutor were the result of the complaint.

TimeTurk, Istanbul based local news website, investigative report showed that the evidence provided, multiple voice recordings, were heavily edited to portray Tahşiye group leader Mehmet Doğan, an MS patient in his 70s, as a religious leader calling for arms. Two legal experts assigned by the court also concluded that the evidence found at Doğan's home was inadmissible at court.

Doğan, a former imam, was known for his opposition to Fethullah Gülen's ideology that supported interfaith dialogue. Gülen himself was the first person to refer to the rival group as Tahşiye in 2009, claiming they posed a serious danger. The investigation that resulted in last weekend's detentions is based on the charge that Gülen decided to punish his religious and political rivals by exploiting his strong influence within state bodies, including the police and judiciary.

Today's Zaman, the Gülenist English-language daily, claimed this week that the Tahşiye group is an al-Qaida-linked organization despite a court decision releasing all jailed members, including group leader Doğan, due to lack of evidence after 17 months of pre-trial detention.

This was not the first time Gülen-linked media organs tried to portray top politicians and others as protecting al-Qaida. One of the allegations widely circulated in Gülenist dailies, was President Recep Tayyip Erdoğan's personal relationship with the Saudi businessman, Yasin al-Qadi, who was listed by the U.S. Treasury as a special designated global terrorist after the September 11, 2001 attacks for links to Osama bin Laden. The U.S. Treasury's Office of Foreign Assets Control (OFAC) removed Qadi from this list in November after a thorough investigation and careful consideration of information available to the Treasury.

Today's Zaman published over 80 stories since December 2013, claiming that Erdoğan was financing Qadi through state contracts and commissions. Since 2001, Qadi has cleared his name through series of court rulings in Switzerland, the EU and U.K. and had his name removed from the U.N. Security Council's terrorism sanctions list. Still, Gülenist dailies tried to exploit his status in the U.S., which was still unresolved, to portray Erdoğan, the leader of a NATO ally, as unreliable in the war against terror.

Kadir Üstün, the research director of SETA Foundation based in Washington, D.C., said that Gülenist news outlets had been trying to give the impression that the Turkish government somehow turned a blind eye to or even supported al-Qaida linked terrorist groups. "This bodes well with the long-standing Gülenist claim that they represent a 'moderate' form of Islam as opposed to the politicized and radical forms of Islam in the Middle East and beyond. In their most recent political fight with the Turkish government, depicting President Erdoğan as an authoritarian Islamist leader is meant to bolster their cause internationally at the expense of Turkey's reputation," he said.

Turkey has been repeatedly targeted by al-Qaida, including four separate bombings on November 15 and November 20, 2003 that left 57 dead and wounded over 700.

This month, Abd al-Baset Azzouz, the alleged leader of al-Qaida in Libya accused of involvement in the 2012 murder of the U.S. Ambassador to Libya Christopher Stevens, was captured in Turkey, according to Milliyet daily. Turkey deported Azzouz to Jordan, where he originally came from following the detention.

"Turkey has a strong track record in fighting terrorism including al-Qaida. Efforts by anti-government groups to portray Turkey as a supporter of terrorist groups are sure to prove futile," Üstün concluded.