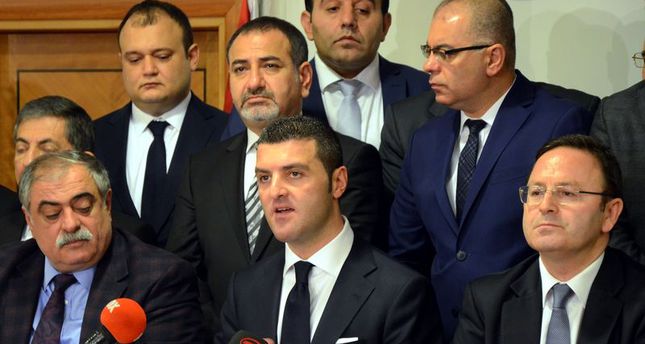 by daily sabah
Dec 19, 2014 12:00 am
Emir Sarıgül has resigned as Deputy Mayor of Şişli district. The administrative race in the CHP's fortress district of Şişli between Emir Sarıgül, former mayor Mustafa Sarıgül's son, who had been serving as deputy mayor, and Mayor Hayri İnönü and has been occupying the main opposition Republican People's Party (CHP) agenda in recent weeks.

Following allegations that the Sarıgül family made death threats against the current mayor in order to maintain control of the municipality administration, CHP headquarters in Ankara stepped in to calm the chaotic atmosphere. On Friday, Emir Sarıgül announced in a press conference that he was resigning from office.

Current mayor, Hayri İnönü, in an interview with a Turkish daily, said that Emir Sarıgül's father, Mustafa Sarıgül, had threatened his family, while Emir Sarıgül insulted him with offensive language. Even though Sarıgül said that he has resigned from his post, a leaked document revealed that all of his powers were in fact removed by İnönü.

Previously, Mustafa Sarıgül had been Şişli's mayor for a long period, and he still dominates the Şişli mayoral administration. Having left the CHP about 10 years ago and transferred to the Democratic Left Party (DSP) due to internal rivalry in the CHP, he returned to the CHP and announced his candidacy for the CHP's Istanbul Metropolitan Municipality race in the March 30 local elections. He did not win the election, but the CHP received most of Şişli residents' votes, and so İnönü was elected mayor of Şişli. Following the election, Sarıgül was appointed deputy mayor. İnönü removed a number of powers from the deputy mayor and this move allegedly led to the Sarıgül family's alleged threatening behavior.

Emir Sarıgül denied the allegations of making threats and offensive language and said on his Twitter account that he would file a complaint against İnönü. The Şişli mayor, on the other hand, said in the interview that the Mustafa Sarıgül threatened him, adding that it is not possible for him to work with Emir Sarıgül anymore.

On Thursday, İnönü's wife Nazlı İnönü, claimed in an interview: "My husband made some changes in the municipality last month. [Mustafa Sarıgül] threatened [us] and said to our sons [who live in the U.S.] that he has hired a mafia hit man, paying $750,000 in New York."

She also claimed that Sarıgül threatened to kidnap her, that both Mustafa and Emir Sarıgül continuously called to threaten her and she was about to file a complaint against the Sarıgül family, but her husband prevented her from doing so.