Erdoğan: We side with Qatar to support oppressed people 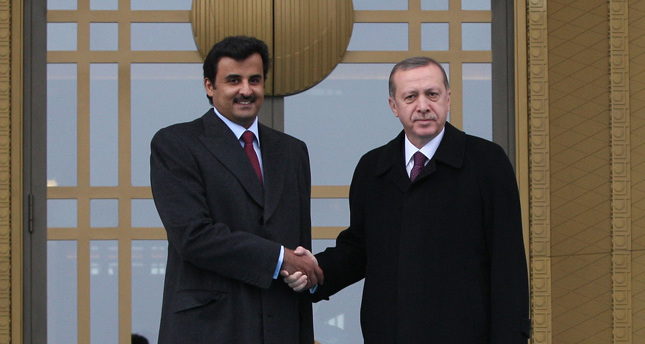 The leaders of Turkey and Qatar, two countries that backed the people’s uprising against dictatorships in the region, met in Ankara to reiterate their commitment to defending the rights of the oppressed

In a joint press conference held at the Presidential Palace in Ankara on Friday as part of Qatari Emir Sheikh Tamim al-Thani's visit to Turkey, President Recep Tayyip Erdoğan said: "Together with Qatar, we always side with oppressed people around the world and we will continue our determination in this regard."

Thani arrived in Turkey for an official visit to hold talks with Erdoğan over the ongoing chaos in the region, energy issues, economic ties and bilateral relations between the two countries.

Erdoğan said that Turkey and Qatar had never separated from each other in terms of steps taken in the Islamic world: "We have always been together in solidarity." On the topic of the ongoing chaotic atmosphere in the Middle East, Erdoğan said that both leaders discussed the developments in Turkey's neighboring countries of Iraq and Syria, which are under threat from the self-proclaimed Islamic State of Iraq and al-Sham (ISIS) as well as the developments in Palestine, Libya, Tunisia and Cyprus.

Confirming Erdoğan's remarks, the Thani added: "We brought the Palestine issue to the table. We also discussed the Syrian crisis and today we see that the picture against which we warned [the world] is happening. All sides should know their responsibility and show that they stand by this. We are on the side of solution as [Erdoğan] said."

Arriving in Turkey on Thursday night, Thani was welcomed by Finance Minister Mehmet Şimşek and, unexpectedly, by Turkish National Intelligence Organization (MİT) head, Hakan Fidan. The liquefied natural gas Turkey will purchase from Qatar and Qatari energy investments in Turkey are also expected to be discussed in the meeting. The MİT head was the most eyecatching figure, as the visit marked the first time that the head of Turkish intelligence has taken part in a welcoming committee. Fidan's attendance at Thani's arrival has been interpreted as a regional issue and is one of the main topics on the agenda of the visit.

In September, Erdoğan paid a two-day visit to Qatar to discuss bilateral ties and economic relations between the two regional allies as well as to hold talks over various regional issues including the threat posed by ISIS militants and the worrisome situation in war-torn Gaza.

Among the most significant allies of Turkey, Qatar is the third country Erdoğan visited as president and the first in the Middle East following Turkish Cyprus and Azerbaijan in early September. Erdoğan was accompanied on his visit by Energy Minister Taner Yıldız and MİT head Fidan.

Relations between Turkey and Qatar have developed further in the last couple years as the two countries found themselves on the same side regarding the Syrian crisis and the Egyptian coup. Turkey was one of the most vociferous critics of the Egyptian coup that ousted President Mohammed Morsi and Qatar was the sole Gulf state that raised its voice against the coup. During Israel's Gaza offensive, the U.S. held meetings with Qatar and Turkey, the two countries that showed the strongest support for war-stricken Palestinians in Gaza. Qatar, along with Turkey, had been the only country that opposed the coup and Abdel-Fattah el-Sissi's rule. At a Gulf Cooperation Council held this month, however, Qatar reversed its policy on Egypt and pledged support for Sissi.