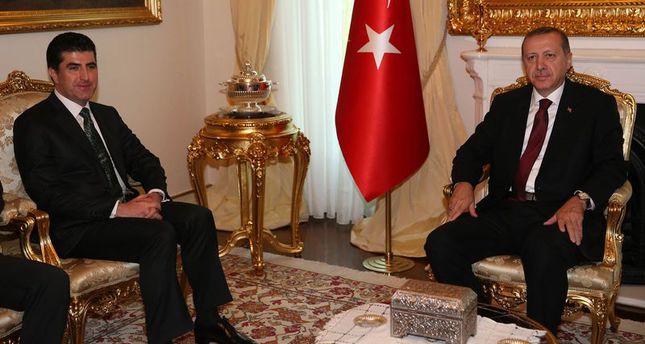 by Daily Sabah Dec 19, 2014 12:00 am
Kurdistan Regional Government (KRG) Prime Minister Nechirvan Barzani arrived in Turkey on Thursday to hold talks with President Recep Tayyip Erdoğan, Prime Minister Ahmet Davutoğlu and other high-level Turkish authorities over the latest regional developments, energy issues, and Turkey's allowance of the passage of KRG peshmerga forces in a move to help Syrian Kurdish fighters battling the Islamic State of Iraq and al-Sham (ISIS) in the region.

In November, Davutoğlu paid a two-day official visit to Iraq to hold talks with Iraqi central government Prime Minister Haider al-Abadi as well as Barzani. Following talks with Barzani, Davutoğlu stressed the close relationship between Turkey and the KRG and said: "Iraq's security is of vital importance to Turkey."

In early November, Foreign Minister Mevlüt Çavuşoğlu announced that Turkey allowed KRG peshmerga forces to enter Kobani from Turkey in accordance with the October 2 troop mandate to show Ankara's continued effort to break the ISIS siege of Kobani. With this move, Ankara signaled that it will act to prevent Kobani from falling to ISIS.

The ISIS siege of Kobani has turned into a test for the U.S.-led coalition that began military action in early October to halt the ISIS advance. The coalition has carried out over 150 airstrikes on ISIS militants besieging the town. According to U.S. officials, the airstrikes have killed hundreds of ISIS militants, but neither the military action nor the coalition's resupplying of the Democratic Union Party's (PYD) People's Protection Units (YPG) fighters by airdrop have produced the expected results.