No journalist arrested in Tahşiye case despite Gülenist claims 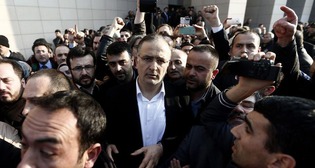 by Daily Sabah Dec 19, 2014 12:00 am
Turkish Criminal Court has released eight Gülenist suspects including Ekrem Dumanlı - the editor-in-chief of the Zaman daily - and ruled for the arrest of four Gülenist suspects, including Hidayet Karaca, CEO of Samanyolu Group and former police chief Tufan Ergüder as part of the Tahşiye operation undertaken on December 14.

After the court's decision, it has been concluded that no journalists were arrested in the Tahşiye case despite the claims made by the Gülenist media.

Dozens of people, including police officers and media staff with alleged links to the Gülen Movement, were detained by an Istanbul prosecutor on Sunday after a prosecutor issued detention warrants for 31 people, concerning their alleged pursuit to crush a rival religious group through illegal means.

Following the completion of interrogations by prosecutors, 15 of the suspects were released.12 of the remaining 16 were sent to court, including Hidayet Karaca and Ekrem Dumanlı.

On Friday, the court released eight suspects out of 12, including editor-in-chief Dumanlı, while ruling for the arrest of the remaining four, none being journalists.

Three of the four suspects are police officers -former chief of the Hakkari Police Department, Tufan Ergüder, the former chief of public security department of Istanbul police, Ertan Erçıktı and police officer Mustafa Kılıçaslan - related to the case. The other suspect Hidayet Karaca, the CEO of the Samanyolu Group was arrested after refusing to give testimony to the prosecutor. He was the only suspect who refused to give testimony.

The Turkish Criminal Court said that "the suspects established an illegal organization with a hierarchical structure that is separate from the state's own structure," adding that the accused aimed to "seize influential posts that govern Turkey's social, economic, military and administrative mechanisms."

The court said that Gülen guided the broadcasting and publishing policies of Samanyolu TV and daily Zaman newspaper.

"The suspect Fethullah Gülen, the leader of a criminal organization known as "Hizmet" movement, which was structured unlawfully in the economic and bureaucratic institutions, has not returned to the country since he left in 1998," the request to the court by the prosecutor said.

The official request also states that sufficient solid evidence has been discovered, proving Gülen's crimes in accordance with the criminal penal code and added that it is currently impossible to reach Gülen since he lives overseas.

These are the charges Fethullah Gülen faces:

1-"Using physical power, threat or deception towards the public to perform an act or during commission of offense, (imprisonment from two years to seven years) Turkish Criminal Code" (TCK) 109/2

2-"Establishing and managing an armed terror organization, (imprisonment from 10 years to 15 years" TCK 314/1

"Despite the Gülenist media's failed attempts to misrepresent the freedom of media, the Tahşiye operation is against those who were convicted of criminal activities by fabricating fake evidence and spreading disinformation," Serdar Karagöz, the editor-in-chief of Daily Sabah said as he commented on the court's decision.

"A disinformation campaign against the freedom of press in Turkey is being conducted by Gülenist media outlets," Karagöz added.

Karagöz also criticized western media for its one-sided and biased coverage of the Tahşiye operation and stated that Turkey has gained significant momentum over exposing terrorist organizations within the state, establishing the rule of law and improving its transparency after the December 14 operation.

The detentions on December 14 were part of an investigation, referred to as the Tahşiye case, into the illegal activities of the Gülen Movement, led by the U.S.-based imam Fethullah Gülen. Members of the movement, so-called Gülenists, are suspected of perpetrating criminal activities through their operatives within the state, especially the judiciary, the police and the media. The December 14 operation was the result of complaints filed against the Gülen Movement by several individuals from the so-called Tahşiye group, which was allegedly victimized by the movement. The prosecutors who handled this case conducted an investigation and found that the complaints had merit and that the evidence against Gülen's rival was forged as part of a concerted campaign, with police and media angles.

President Recep Tayyip Erdoğan had vowed to take alleged Gülen Movement group members to task on numerous occasions. The government has described the movement and its supporters as the "parallel state" since late 2013.