Deputy PM: Media must not take part in illegal acts 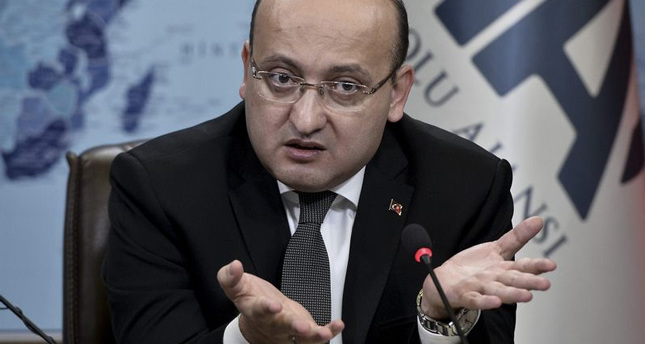 by AA Dec 20, 2014 12:00 am
Deputy Prime Minister Yalcın Akdoğan urged the media on Thursday to take a clear position against all plots and unlawful acts that allegedly target the will of the Turkish people.

"It is vital for the media to openly oppose all conspiracies aimed at the Turkish people's national will and at the citizens themselves, and not take any part in illegal acts," Akdoğan said.

He made the remarks at Anadolu Agency headquarters in Ankara while attending a signing ceremony held to mark the Second Collective Labor Agreement between AA and the Medya-İş Labor Union.

Akdoğan said press freedoms and press ethics should develop on the basis of democracy and the rule of law.

He said that the media was the fourth pillar of democracy. "What matters is the content, the mission and the role media plays," he said.

"A media that puts teeth in anti-democratic tendencies, applauds and promotes such practices and works as a coup promoter cannot be the fourth power of democracy," he added.

"Whether you commit a crime via the media or a member of the press commits the crime, it doesn't annul the crime itself," he said.

"No one is privileged within a system of laws," he said.

His remarks come in the aftermath of Sunday's Istanbul-based police operation against senior media figures and police officers in 13 provinces across Turkey.

More than 20 suspects were taken into custody in the operation, including the editor-in-chief of Turkey's Zaman daily, Ekrem Dumanlı; chairman of Samanyolu Media Group Hidayet Karaca; producer Salih Aslan; director Engin Koç of Samanyolu TV, and Makbule Cam Alemdağ, a scriptwriter for a television series.

The detainees were accused of being affiliated with what the Turkish government described as the "parallel structure," an alleged group of bureaucrats embedded in the country's institutions, including the judiciary and the police.

In December 2013, an anti-graft probe targeted a number of high-profile figures including the sons of three former government ministers and leading Turkish businessmen.