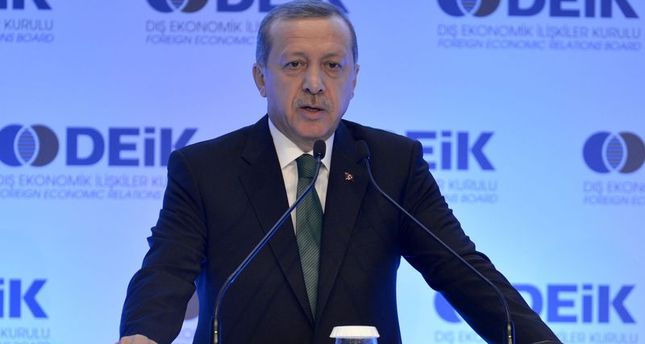 President Recep Tayyip Erdoğan has criticized the European Union for lacking objectivity regarding press freedom. He spoke at the Foreign Economic Relations Board Convention in Istanbul on Saturday and touched upon a number of issues including the December 14 Tahşiye Operation and underlined that Turkey is a state governed by the rule of law.

He stated that the December 14 Tahşiye Operation was falsely and intentionally depicted by agents of the Gülen Movement as a campaign that claimed the press was being suppressed in Turkey. "The international press has embraced and welcomed this campaign" said Erdoğan, who touched upon the EU's eagerness to criticize Turkey in this regard while noting that they have gone so far as to make a statement on the weekend, criticizing the so-called suppression of the press.

Erdoğan underlined that the December 14 case is carried out independently by the judiciary and that the government cannot interfere in the matter in accordance with the rule of law and called everyone to respect the decisions of the judiciary.

He noted some groups exploit journalism as a means to mask their hidden agendas and stated that crime is a crime regardless of who commits it. "Don't journalists commit crimes?" asked Erdoğan, referring to the wiretapping case in Britain where tens of journalists were detained. He continued by referring to the journalists who were also detained in Egypt and the Anadolu Agency reporter who was subjected to violence there and criticized the EU for never mentioning these incidents."The EU stood by as the governmental offices of Turkey were attacked by rioters during the Gezi Park incident" he said.

"Israel killed 16 journalists this year and dismissed those for critizing itself, while the EU remained silent" said Erdoğan, who argued the EU never criticizes the oppression of journalists in Egypt or elsewhere in the world.

Erdoğan said there have been coup attempts against the government previously, even assassination attempts against him, but they did not give in to such attempts, and if they did, they would not be able to carry out Turkey's 2023 goals.