PM stresses CHP failure to manage district, asks how it would run Turkey 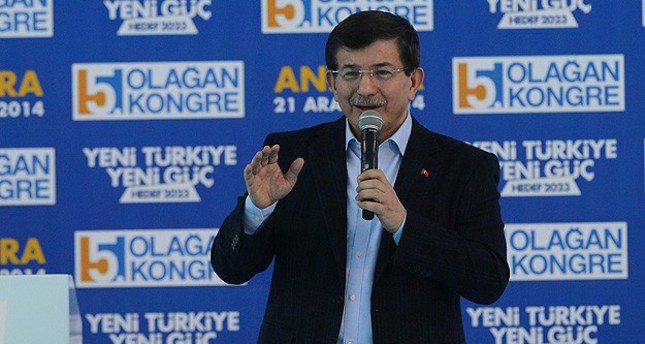 by Daily Sabah Dec 21, 2014 12:00 am
Addressing Justice and Development Party (AK Party) members at provincial meetings in the capital city Ankara and northwestern city of Bolu over the weekend, Prime Minister Ahmet Davutoğlu targeted the main opposition Republican People's Parties (CHP) failure to manage Istanbul's district of Şişli, which is known as a fortress of the CHP in Istanbul.

"How are they supposed to rule the entire country when they are not even capable of administrating Şişli?" Davutoğlu asked, referring to the latest administration debate within the CHP's Şişli administration that ended with a resignation of Deputy Mayor Emir Sarıgül, the son of Mustafa Sarıgül.

Mustafa Sarıgül had been Şişli's mayor for a long period and he is a figure who still dominates the Şişli mayoral administration. Having left the CHP about 10 years ago and transferring to the Democratic Left Party (DSP) due to internal rivalry in the CHP, he returned to the CHP and announced his candidacy for the CHP's Istanbul Metropolitan Municipality mayoral race in the March 30 local elections. He did not win the election, but the CHP received most of Şişli residents' votes, and so CHP's Şişli mayoral candidate in March 30 local election Hayri İnönü was elected mayor of Şişli. Following the election, Sarıgül was appointed deputy mayor. İnönü removed a number of powers from the deputy mayor and this allegedly led to the Sarıgül family's alleged threatening behavior.

Emir Sarıgül denied the allegations of making threats and offensive language and said on his Twitter account that he would file a complaint against İnönü. The Şişli mayor, on the other hand, said in an interview that Mustafa Sarıgül had threatened him, adding that it is not possible for him to work with Emir Sarıgül anymore. On Friday, Sarıgül was dismissed from the municipality and over the weekend, a leaked video showed the quarrel in the municipality.

Davutoğlu, criticizing the CHP for pursuing coup attempts in the past, added, "They did not manage to stage a coup in Turkey and now they tried to stage a coup against each other in Şişli. Are they able to run the Şişli municipality? Does [CHP Chairman Kemal] Kılıçdarıoğlu intervene in the incidents in Şişli?"

He said that the AK Party never pursues ethnic discrimination: "In our political approach, there is no discrimination such as Kurdish, Turkish, Zaza, Alevi or Sunni."

The reconciliation process, initiated by the government, began when a cease-fire was signed between the Turkish government and the PKK, followed by a series of democratic reforms to improve the rights of Turkey's Kurdish population. It is reported that over 50 percent of the people in the country are in favor of the initiative.