Gülen: 'Explode yourselves like a bomb against the US' 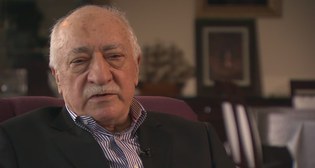 
It has been discovered that Fethullah Gülen, the leader of the Gülen Movement who claims to base his movement on dialogue and tolerance amongst different religions, has previously made radical remarks encouraging Muslims to destroy "infidels."

Gülen's call for taking violent action against non-Muslims can be traced to the voice recording of a sermon which he preached in the 1980s following the 1980 coup d'etat, when he left the city of İzmir and traveled to different cities in Anatolia.

Allegedly preaching about the significance of Jerusalem for Muslims, Gülen can be heard crying and criticizing himself and all Muslims for failing to protect the holy city of Jerusalem and Masjid al-Aqsa Mosque.

"A believer should be like a bomb even if the United States of America opposes him/her! He/she should continue by exploding and smashing the head of the infidel!" Gülen screamed, accompanied by a mixture of lamenting and screaming from the audience. He encouraged the screams by saying that the voice of believers should move heaven and earth, and told them to roar.

Gülen then cursed those who did not stand against the occupation of Jerusalem and Masjid al-Aqsa and told his audience to take immediate action by voicing the issue to everyone, including deputies.

In the recording, Gülen can be heard as saying "We will ruin the plots of America and reveal their true side". These are particularly remarkably radical and controversial sentiments given he has been living in the U.S. in self-imposed exile since 1999.

"We will turn the U.S.'s games upside down in the next 5-10 years," Gülen is heard saying in the sermon.

A Turkish criminal court issued an arrest warrant last week on Friday for Gülen following a request filed earlier by Istanbul's chief public prosecutor. It was reported that sufficient concrete evidence has been found, proving Gülen's involvement in leading a criminal organization and crimes including forgery, fabricating evidence and forming an alleged crime syndicate to overtake the sovereignty of the state.
Last Update: Dec 23, 2014 3:07 pm
RELATED TOPICS