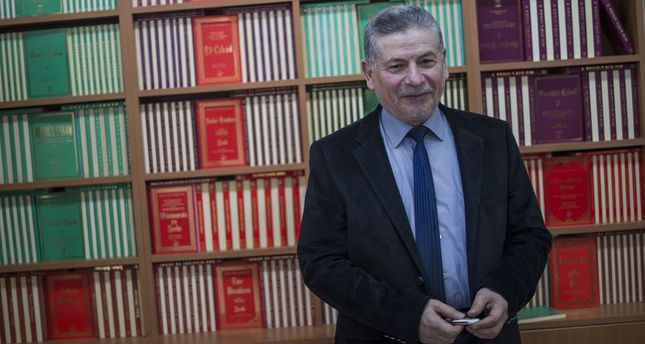 by Daily Sabah Dec 22, 2014 12:00 am
Bünyamin Ateş, former owner of the Tahşiye publishing house and a journalist who spent eight months in prison after being allegedly targeted by the Gülen Movement, which depicted his group as a terrorist organization, has accused chief Gülenist media figure Ekrem Dumanlı of being a hypocrite by associating the whole process with press freedom.

Dumanlı, the editor-in-chief of Zaman daily, was among those who had a detention warrant issued against them as part of an investigation launched by an Istanbul prosecutor for suspects' alleged involvement in terrorist activities. Dumanlı was detained along with Hidayet Karaca, the CEO of Gülen-linked Samanyolu Group, some other media staffers and police officers as the result of the operation that was launched on Dec. 14.

Although the operation was about the suspects' alleged involvement in fabricating a crime and slander against a group they deemed a threat to their entity, Gülen-linked media outlets chose to portray it as being against journalists. These media outlets have propagated the view that the government - which they declared as a foe in 2013 - is behind the operation that targeted them. Refuting those claims, Demirtaş accused Dumanlı of being a hypocrite, while questioning if "a news article constitute a crime."

Ateş forcefully said: "If those news articles are trivial, I call on Dumanlı to be incarcerated for 20 months [like some of us were]." He also added that 122 people had been detained as part of an operation targeting them. Some were jailed for eight months to 20 months.

"If Dumanlı asks to be in Karaca's shoes, I wish he experiences what we experienced. He is being two-faced," Ateş further stated.

An operation was launched on Dec. 14 as part of an investigation launched by an Istanbul prosecutor. Thirty-one suspects with alleged links to the Gülen Movement had detention warrants issued against them. The suspects were accused of taking part in setting a plot against a group named "Tahşiye," a group which they considered an opposing rival.

Eight Gülenist suspects, including Dumanlı, have been released by the Turkish Criminal Court leaving no journalists under detention. Four people have been arrested, including Karaca.

In 2010, an operation was carried out against Tahşiyeciler, and a total of 11 people were detained while Mehmet Doğan, a senior member of the group, was imprisoned for 17 months. Doğan, also known as "Molla Muhammet," was allegedly against some of the ideologies of Fethullah Gülen, the leader of the Gülen Movement.

"Mullah Muhammet's views on the Gülen Movement's interfaith dialogue were bothering Gülenists. He wrote and published a series of works regarding the subject. Gülen was infuriated by the publications that had an influence in eastern Turkey," Ateş said.

"They spot a certain group and fabricate a crime unless they get what they want, then they launch an operation against them via infiltrators within judiciary and police." Ateş said.