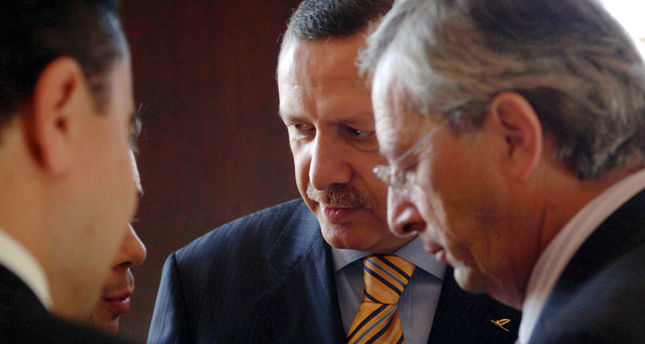 President Recep Tayyip Erdoğan discussed Turkey's EU bid with EU Council President Donald Tusk on Tuesday to stress Ankara's determination in its EU membership process. Calling Tusk to wish him success in his new post, Erdoğan reiterated Turkey's determination to be an EU member country and called for close cooperation between Turkey and the EU. According to presidential sources, Erdoğan invited Tusk to Turkey and Tusk said that he would be pleased to see Erdoğan in Brussels. Reportedly, Tusk stressed that he hopes to see the opening of a new chapter in Turkey's EU accession process in 2015.

Erdoğan also greeted Juncker on assuming his post, to which he was elected in July, and invited him to Turkey. He is known as an arch federalist and his presidency was opposed by EU countries opting for less integration, such as the U.K.

Turkey has to successfully conclude negotiations with the EU in 35 policy chapters, involving harmonizing legislation with the bloc and the adoption of EU standards.

So far, 14 chapters have been opened for negotiation while 17 remain blocked and a further four are yet to be discussed. Only one new chapter has been opened in the past three years.

Turkey has been seeking to join the EU for 27 years, but negotiations have frequently come to a halt mostly due to French and German opposition and Turkish tensions with Cyprus.

The bloc has so far opened 14 of 35 accession chapters with Turkey, but these do not include controversial Chapters 23 and 24, which cover issues of justice, fundamental rights, freedom and security. The other EU membership hopefuls are Albania, Bosnia, Macedonia, Kosovo, Montenegro and Serbia. Iceland is also formally an accession candidate, but put negotiations on hold last year.

Juncker said previously that he does not expect the EU to gain any new members during his five-year term, which is slated to begin in November.
Witnessing an intense diplomacy schedule due to the latest regional issues, Turkey continuously reiterated its bid to be an EU member county.

High Representative of the EU for Foreign Affairs and Security Policy Federica Mogherini, Enlargement Commissioner Johannes Hahn and Humanitarian Aid Commissioner Christos Stylianides traveled to Turkey on Dec. 8-9 in one of the highest profile EU visits in years to hold talks over the ways to cooperate more closely in Turkey's EU accession process.

Hahn indicated that they expect to open one or more negotiation chapters during the next term of the presidency and the "new EU commission is ready for doing its best in speeding up the process." Hahn said: "We know that Turkey's aim is to work with European standards in the proper sense and it is among Turkey's most important objectives. However, we need to have vitally close economic relations and those need to be maintained more intensively as well. In this sense, some requirements in reforms, especially on law and fundamental rights, still continue.

Nevertheless, speaking of the process, I want to express that the new EU Commission is ready for doing its best in speeding up the process."

Turkey has been attempting to fill the requirements to join the EU since 2005, but political hurdles, the divided island of Cyprus and resistance to Turkish membership from some EU countries have slowed the process and relations have often been difficult.

However, a new president and prime minister in Turkey and a new European Commission in Brussels could lead to fresh dialogue and pave the way for regular high-level talks to discuss common strategic interests as top EU officials hope.

Another significant step in terms of Turkey's EU bid was taken when Italian Prime Minister Matteo Renzi paid a visit to Turkey on Dec. 11. While the main agenda of the visit was Turkey's EU accession bid, Renzi made it clear when he visited the Anıtkabir Mausoleum of Mustafa Kemal Atatürk in Ankara, the founder of the modern Turkish Republic, as a first protocol in diplomatic visits by saying: "Modern Turkey and Italy have strong political, economic and cultural ties today based on sincerity. I will also support Turkey's efforts on their way to the EU."

Italy took over the EU presidency from Greece in July and Italian officials have continuously said that Italy would like to speed up Turkey's EU accession process during its six months in the position and Italian high-level officials reiterated that Turkey has Italy's full support in its EU membership process.