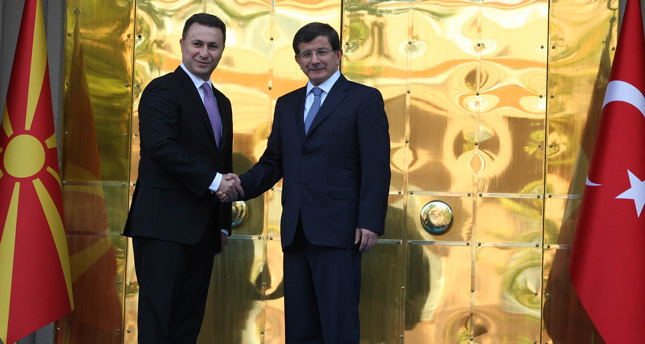 by Daily Sabah Dec 23, 2014 12:00 am
Prime Minister Ahmet Davutoğlu began a two-day visit to Macedonia yesterday to discuss bilateral political, economic and trade relations regarding regional and international issues with his counterpart Nikola Gruevski. After being received by Macedonian President Gjorge Ivanov, Prime Minister Davutoğlu participated in the National Day of Turkish Language Education, which has been celebrated since 2007, and met with Turks who live in Macedonia. Known for their loyalty to the Macedonian state, according to the 2002 census, Turks constitute the third largest community in Macedonia, with 3.8 percent of the total Macedonian population. The Turks of Macedonia have been represented in the Macedonian Parliament since 2002.

The last time dignitaries from the two countries met was on Sept. 15, when Macedonian Prime Minister Gruevski paid a visit to Turkey, becoming the first foreign leader to be hosted by Davutoğlu in his new position of prime minister.

In 2012, something of a diplomatic golden age between the two countries sprung up. Since May 2012, four high-level official visits have been paid, either by Turkish or Macedonian officials.

The foreign minister of the Republic of Macedonia, Nikola Poposki enjoyed a three-day visit to Turkey on May 14, 2012. During his visit, a visa-free travel agreement was signed that permitted the citizens of both countries to travel without a visa for less than 90 days.

Later on, Turkish Parliament spokesman Cemil Çicek, paid a return visit to Macedonia on May 17, 2012.

In honour of the 20th anniversary of reciprocal diplomatic ties and the National Day of Turkish Language Education on Dec. 21, then Minister of Foreign Affairs Davutoğlu embarked on a two-day trip to Macedonia on the invitation of his Macedonian counterpart Poposki. During the visit, an agreement was signed between the two countries for the establishment of Centers of Culture in both countries.

In parallel to these developments, on Jan. 18, 2014, the foundations of the Turkish Theater in Skopje were laid, and a Military School in Bitola and the Memorial Room of Mustafa Kemal Atatürk were opened. The reconstruction was supported by the Turkish Cooperation and Coordination Agency's (TİKA) office in Macedonia and the Ministry of Culture of the Republic of Macedonia.

Also between Nov. 23 and Nov. 25, Çiçek paid his second visit to Macedonia, again as a return visit after his Macedonian counterpart Trajko Veljanovski's two-day trip to Turkey in June.

The trade volume between Turkey and Macedonia was $375 million in 2013, equating to 3.6 percent in Macedonia's total trade volume.