Turkey wants US to extradite Gülen after arrest warrant 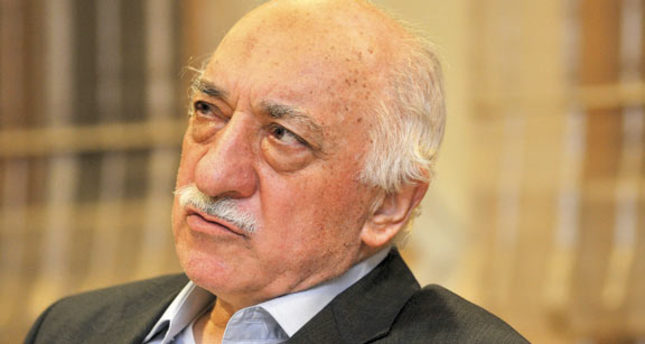 Turkey, which has been loyally implementing a 30-year agreement with the U.S. to extradite dangerous fugitives, is expecting a similar reciprocal gesture from its NATO ally regarding Fethullah Gülen

With the arrest warrant issued by an Istanbul court for Fethullah Gülen, the head of the Gülen Movement, which is allegedly responsible for infiltrating the police and judiciary with an aim to topple the government, the first tangible step that may pave the way for his extradition has been taken. Gülen currently resides in the U.S. state of Pennsylvania. The court decision will enable the Turkish government to ask Interpol to conduct an investigation and could possibly result in the issuing of a Red Notice since Gülen cannot be reached directly by Turkish officials. While the issue of extradition has become a prominent topic for Ankara after the court's arrest warrant, previous extraditions between the two countries have also come into the forefront. Turkey and the U.S. have a different extradition treaty from the one between EU countries and the U.S.

The Extradition and Mutual Assistance in Criminal Matters between the United States and the Republic of Turkey treaty from 1979, which came into effect on Jan. 1, 1981, says: "When the offense has been committed outside the territory of the Requesting Party, the Requested Party shall grant extradition subject to the provisions described in this Treaty if either: the laws of the Requested Party provide for the punishment of such an offense committed in similar circumstances, or the offense has been committed by a national of the Requesting Party, and that Party has jurisdiction, according to its laws, to try that person."

Despite the different procedure prescribed in the treaty, Turkey extradited a number of criminals to the U.S. over the latest five years while it has not demanded any extraditions from the U.S. until now.

Among the criminals extradited by Turkey, Diane H. Frederick Atari, 43, drew the most attention from an indictment in Loudoun, Virgina for a $50 million mortgage and credit scam. Atari fled to Turkey in 2009 shortly before being indicted. She was arrested by Turkish police forces the same year and spent more than a year in prison. Turkey extradited her on Feb. 18, 2011. She was charged with mortgage fraud, racketeering and money laundering. Jordanian Fahed Kutkut, who was sought by the police for murder and wide-scale theft was also extradited by Turkey to the U.S. In 2009, Kutkut was arrested in Turkey based on the "red notice" that was issued against him. In 2010, Kutkut returned to the U.S. and was booked at the Cuyahoga County Jail in 2011. Ukranian Yuri Zinchenko, who was sought for human trafficking, money laundering and organizing a gang, was also extradited from Turkey to the U.S. Iranian Sayed Hadi Mahdavi Mortazavi was also sought for charges of money laundering and fraud through communications technology. Ahmed Diini, a Dutch citizen of Somali origin who was being sought on terrorism charges with a red notice by the American government, was captured in Turkey in March and is currently being held in an Istanbul prison as part of the extradition case waiting period. Ahmad Ibrahim al-Ahmad, a Syrian who was believed to supply improvised explosive device (IED) components to be used against U.S. soldiers and who is held responsible for the murder of four U.S. soldiers, was extradited to the U.S. by Turkey in August 2014. Sought with an Interpol Red Notice, Ahmad was arrested in Turkey on May 17, 2011, and extradited from Turkey on Aug. 27, appearing in court a day after his extradition. Ahmad, who is accused of supplying IED components that were used against U.S. soldiers in Iraq from 2005 until July 2010, is reportedly associated with the 1920 Revolution Brigades. A statement issued by the U.S. Department of Justice read that Ahmad supplied IED components to the 1920 Revolution Brigades insurgent group. The extradition request for Brazilian Domingos Neto Trofino, who was sought for tax evasion and fraud, was denied due to a lapse of time.

U.S. officials, speaking on the latest debate of Gülen's extradition have said that the Justice Department will process the application for his extradition, but have underscored that it might take a long time. The officials, who refrained from making comments on presumptive matters, said general procedures are followed for extradition requests. "All of the applications go through the same judicial process and the standards are equal for every country," they said. There are a few steps needed to be taken for the warrant. Since Gülen lives abroad, the warrant is first submitted to the Justice Ministry's General Directorate of Penal Affairs, then the ministry will apply to Interpol with a request to issue a Red Notice and lastly, if the Interpol secretary general accepts the demand, a Red Notice will be issued for Gülen.