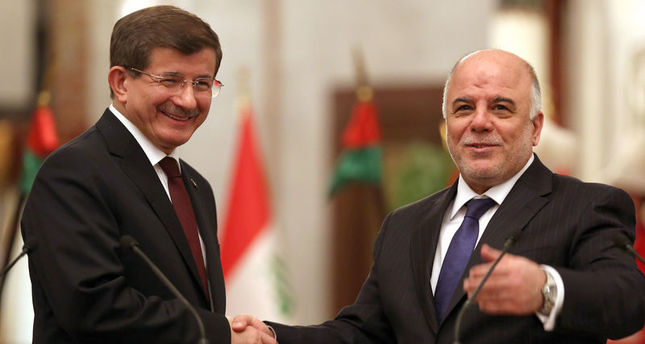 The two countries' relations entered a new era with Abadi becoming prime minister in September. Both countries are facing the Islamic State of Iraq and al-Sham (ISIS) in the region, which has given rebirth to cooperation in security after the cracks that developed with Abadi's predecessor, Nouri al-Maliki.

Indeed, Davutoğlu had emphasized the potential for cooperation in the fight against ISIS during his last visit to Iraq. Pointing out that Turkey is ready to give intelligence support to Iraq in its fight against ISIS, Davutoğlu said: "Our attitude is clear on the issue of security risks that Iraq is facing, notably the ISIS threat. Components of that threat carry a potential of threat for Turkey though. Either ISIS or the PKK or in other forms, Turkey's attitude of every kind of terror is quite loud and clear."

Accordingly, the two countries' cooperation against ISIS constitutes a huge part of the agenda in Abadi's visit.

Can Acun, a researcher of Middle Eastern politics at the SETA Foundation stressed the dynamic structure of Iraq's internal policy concerning ISIS expansion, intervention of the U.S.-led international coalition, losing Maliki's power and new political processes emerged with Abadi. "Turkey sees the Abadi government as an opportunity for mending fences with Iraq, contrary to during Maliki's term in which oppressive policies ignoring ethnic and sectarian balances were seen. With this visit, both countries are struggling to reactivate the YDSK [High-Level Strategic Cooperation Council] after Maliki. … Even Davutoğlu and Abadi's reciprocal visits point to Turkey-Iraq relations witnessing a positive atmosphere in a new term considering the potential of the Iraqi government taking steps that disregard ethnic and sectarian balances, new deviances may come to light though."

In addition to that, a likely cooperation in oil between Iraq and Turkey is on the agenda for the visit. Ankara had welcomed the oil agreement between Baghdad and Irbil signed last month, and Davutoğlu expressed the urgency of the way being paved for Iraqi oil in southern Iraq to flow through the Ceyhan port during a speech on Dec.13.

"A serious base for agreement between Baghdad and Irbil was born after my last visit to Iraq. As a deal made on this agreement, we are giving importance for oil, not just from Kirkuk, but also from southern Iraq flowing through the same line to Ceyhan. Iraqi Prime Minister Abadi will be in Turkey two weeks later, we will hold the YDSK summit. We want this Iraqi oil to flow to Adana and Ceyhan through the safest pipeline," he said.
Sajad Jiyad, a London-based independent analyst and researcher on Iraq, thinks that Turkey and Iraq may conceivably find a deal regarding the disastrous effect of the drop in oil prices. "Northern Iraqi oil can only be exported through Turkey, and while this remains the most important source of revenue for Iraq, a solution with Irbil must be agreed upon. Falling oil prices also put pressure to agree on a proper deal and Turkey wants to avoid conflict with Baghdad over Kurdish oil exports. In the end it is in the interest of all parties to have a deal in place," he said.
The first YDSK summit was held in Baghdad on Oct. 15, 2009 with the participation of the two countries' prime ministers at the time, Recep Tayyip Erdoğan and Nouri al-Maliki. The council consists of three parts: The Political, Diplomatic and Cultural Sphere, Economic and Energy Related Sphere and Security and Military Cooperation Sphere.

YDSK's establishment was in 2008 and its signing into effect in the context of the 48 Memoranda of Understanding in a broad array of cooperation fields, created a long-term mutually beneficial strategic partnership between Turkey and Iraq through development of bilateral relations in all fields. In 2011, Iraq became Turkey's second largest export market.