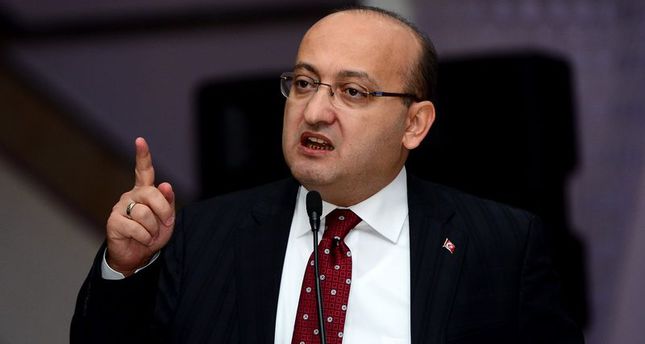 by Daily Sabah Dec 24, 2014 12:00 am
Deputy Prime Minister Yalçın Akdoğan posted messages on his Twitter account regarding statements delivered from senior members of the Kurdish Communities Union (KCK) – an umbrella organization that includes the PKK – who are located in the Qandil Mountains in Iraq. In his tweets, Akdoğan said that the provocative comments from the KCK would do no good to the reconciliation process, which the government has been pursuing to end the decades-long conflict between the state and the PKK.

"Hollow, untrue, ill-timed, inapt and provocative statements delivered by [the KCK] will be no benefit to the reconciliation process," Akdoğan tweeted.
The reconciliation process was launched last year as an initiative by the Turkish government that aims to secure an end to the decades-long conflict with the PKK, which has claimed the lives of more than 40,000 people.

Reconciliation talks stalled after the Oct. 6-7 Kobani demonstrations. Dozens were killed in the protests that were staged by pro-PKK groups, who complained about the government's lack of support for Kurdish forces fighting in Kobani against the Islamic State of Iraq and al-Sham (ISIS).
Even though the demonstrations harmed the government's trust in the Peoples' Democratic Party (HDP) and other parties involved in the protests, Prime Minister Ahmet Davutoğlu announced on Tuesday that everything was back on track.

The two sides, having shaken off provocations that have damaged the reconciliation process, are clinging to the hope that a resolution will soon be reached. Although the two have recently expressed sincerity about reaching a conclusion in the process, Akdoğan claimed senior KCK members have harmed the process, intentionally or unintentionally, with provocative statements.

Akdoğan also wrote on his twitter account that the KCK was stuck in the past and are "driven into a dreamy vision."

"Whoever wakes up to the same morning every day, fails to seize the time," Akdoğan added, accusing the group of being afflicted with "anachronism."