Erdoğan: Science should be liberated from political tutelage 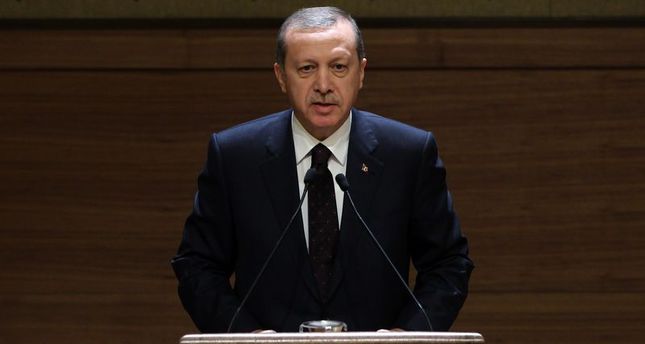 President Recep Tayyip Erdoğan has said that Turkey must liberate science from the tutelage of politics and law, as well as peer pressure, further noting that Turkey has won the fight against the "parallel state," also known as the Gülen Movement. He made the statements during his speech at TÜBİTAK's Award Ceremony for Science and Exclusive Incentives in Ankara.

Erdoğan underlined that Turkey has won and continues to win against unlawful actors who have attempted to overtake the state apparatus through agents who have infiltrated various institutions including TÜBİTAK. He described the Gülen Movement as an obstacle to freedom in the country, and said their inactivation will open the way not only for education and science, but also for politics, the economy, foreign policy and social life.

He touched upon the wiretapping incident where Turkish officials, including himself, were unlawfully wiretapped using Turkey's Scientific Research Center (TÜBİTAK) as a base, describing it as immoral.

Erdoğan argued that science must be based on independent grounds. He stated that it is crucial for old professors and university chancellors to discard authoritarian ideologies of the past – especially those stuck in the 1940s – and adopt a more innovative and liberal mindset while teaching.

"Of course we respect their work and would consult them but we cannot let them poison the education system with authoritarian ideologies of the Old Turkey" Erdoğan said.

"Our ancestors have provided a favorable atmosphere for scholars and scientists to freely conduct their work and we highly value their contributions" said Erdoğan, who argued it was necessary to raise scientists rather than bragging about the contributions and successes of the nation's predecessors.

"Turkish language of the Ottoman Era was made to disappear and now we are compelled to use Western terminology for scientific knowledge," the president noted, criticizing Old Turkey's insecurity about the country's historical and religious past.

He underlined the fact that the state should provide financial and moral grounds for scholars and scientists to conduct their work and establish necessary institutions including schools, research centers and libraries.

He stated that they have been struggling to liberate science from all sorts of tutelage and have taken significant steps to reform the country's education system from primary schools to post-secondary education.

"A nation who doesn't believe in its own values is doomed to be a copycat" said Erdoğan, who underlined that it is crucial for the Turkish nation to have self-confidence in its own legacy, culture and history and not have an inferiority-complex against the West.

He argued that those who follow the steps of others and imitate others are doomed to be left behind. "As Turkey, we need to set an example in order to be the one which is imitated and followed," he said.

The president also announced that the percentage of Turkey's GDP allocated to research and development will be increased from one to two percent in efforts to improve innovation in the country. Turkey is also aiming to decrease the number of students per class and increase the number of teachers.

He highlighted that these initiatives are aimed at ensuring that Turkish students do not go abroad to study and contribute to the education system in the country.