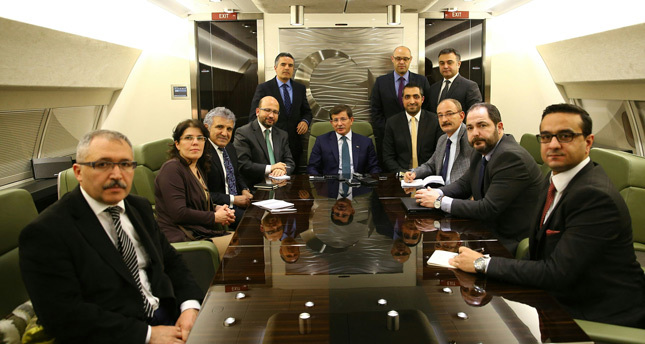 The Dec. 14 operation was launched as a result of a complaint filed by a religious group persecuted by the Gülen Movement, argued Prime Minister Davutoğlu on his way to Macedonia

Prime Minister Ahmet Davutoğlu told Ankara representatives of major news outlets on his way to Skopje prior to his visit to Macedonia on Monday evening that "[t]he December 14 operation is not a media crackdown or the government's revenge against the Gülen Movement, it's a human rights struggle of a religious group that was targeted and victimized by the Gülen Movement for criticizing Fethullah Gülen's way of understanding religion."

Explaining that the December 14 operation had started with legal complains from a religious group called Taşhiye, whose members were imprisoned with false evidence and labelled terrorist by Gülen Movement-linked police officers and prosecutors, Davutoğlu said that this case is a good example of how the Gülen Movement uses its members in state intuitions to destroy its rivals.

Describing the Gülen Movement as a gang that cannot tolerate any other idea, Davutoğlu added that after the revelation of their intention they tried to portray this case as an issue of press freedom: "After this operation [was conducted] there are [now] some circles that have launched a cruel smear campaign against our governments and try to show this incident as media crackdown. In fact, the prosecutors of this case invited all the suspects in for testimony. However there is one journalist who did not respond to this call and turned this legal procedure into a media show. After his testimony he was released on the condition of trial without arrest."

Underlining that this case is not related to press freedom or freedom of expression, Davutoğlu said that no journalist has been imprisoned as part of the investigation. "This case is about human rights violations by the Gülen Movement, however, they try to show the legal procedure as human rights violations," he said. He added that the December 14 operation was carried out independently by the judiciary, and the government cannot interfere in the matter in accordance with the rule of law and called everyone to respect the decisions of the judiciary.

Saying that they are under siege from a wide range of propaganda, Davutoğlu added that this incident has more clearly revealed who is behind this smear campaign. Davutoğlu also said that this issue was discussed in the last Cabinet meeting and the measures that need to be taken in the field of public diplomacy were discussed.

Criticizing EU officials for issuing statements on Sunday without understanding the details of the case and discussing with Turkish officials, Davutoğlu said that the EU's stance lacks objectivity. He also denied allegations that he cancelled his trip to Brussels and said that they will travel there in the coming weeks after they finalize the date.

Touching upon the progress of the parliamentary corruption inquiry commission that postponed the vote for a trial of four former ministers accused of corruption to January 5, Davutoğlu stressed that they did not intervene in the commission and from now on there would be no interference with their decision.

"Let the commission do their work and decide about the trial. We cannot declare someone guilty or not guilty in advance." He said that fighting corruption is one of the main principles of the Justice and Development Party (AK Party) and that there will be no tolerance for corruption in the event of sufficient evidence. "We don't turn a blind eye to corruption no matter who is involved. My stance and President [Recep Tayyip] Erdoğan's stance on this issue is very clear."

On the other hand, Davutoğlu described the December 17 and December 25 operations as coup attempts and said that the bigger picture needs to be taken into account: "There is no doubt the December 17 and December 25 operations, stopping and raiding trucks belonging to the National Intelligence Organization (MİT) and the February 7 investigation against Hakan Fidan and his colleagues at the MİT was part of this coup attempt. All of these events cannot be reduced to one event just like a corruption investigation."