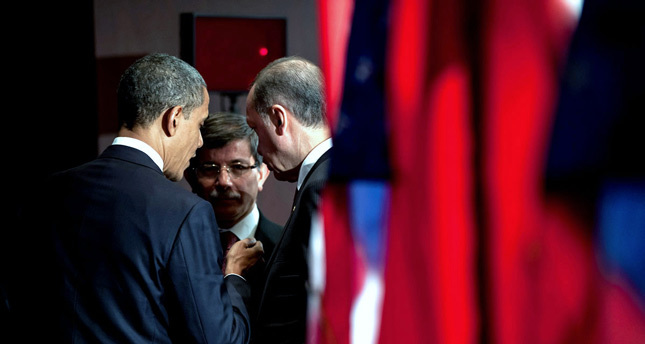 An appeals court upheld the prison sentence for former police Chief Hanefi Avcı, who was released in June after being imprisoned in 2010 following the release of his book criticizing the Gülenist structure in the police. Experts say the decision was made by Gülenist agents in the judiciary

Turkey stepped up its efforts to carry out a more multilateral foreign policy despite the latest chaotic atmosphere dominating its neighboring countries and the Middle East. The country witnessed many official visits by world leaders and Turkish leaders have been paying visits to critical countries amid a busy diplomatic schedule. According to experts speaking to Daily Sabah, the main reason for this diplomacy traffic in Turkey is the current regional issues stemming from the Islamic State of Iraq and al-Sham (ISIS) and other terrorist organizations metastasizing in the region and Turkey's strategic location immediately next to troubled regions. According to political expert Professor Dr. İlter Turan and political expert Şaban Kardaş, the reason behind this diplomatic traffic is Turkey's possible role in the resolution of the crises in the Middle East, caused mostly by ISIS. Spreading terror in the region, especially in Iraq and Syria, ISIS has also threatened Western countries with terrorist attacks.

Davutoğlu, on his visit to Macedonia, which is linked to Turkey with cultural and historic ties, touched on the latest agreements between Ankara and Moscow: "Turkey's relations with Russia have developed. The importance of diplomacy has undeniably [affected this]. Our good relation with the EU does not force us to have sour relations with Russia." These remarks came as a direct indicator of the multilateral foreign policy that has recently occupied the Turkish political agenda.

Speaking on relations between Russia and Turkey, Turan said that what paved the way for these developing relations is the un-polarized world order appearing in the over two decades since the end of the Cold War.

"This multilateral relation [between Russia and Turkey] shows itself mostly in economic areas," Turan said.

Emphasizing that there are undeniably some political divergences between Russia and Turkey, especially on the ongoing civil war in Syria and the status of Crimean Tatars, Turan said that despite competitive politics and divergences between the countries, they manage to cooperate.

"Both countries have complicated relations with the EU from time to time and this makes the two countries approach each other," he added, touching on Turkey's long-sought EU accession process and the tense ties between Russia and the EU caused by Russia's actions in Ukraine and energy.

Kardaş said that Turkey and Russia have always had some drawbacks in their relations, but what matters is to manage those drawbacks rather than maintain them.

"Both sides are determined to develop these relations and the important part in the relations [despite the political differences] is not to generalize them as a whole," Kardaş added. Davutoğlu said in a speech that Turkey ranks seventh in the world in terms of diplomatic representation and added that Turkey does not develop relations only with diplomacy, but also with other instruments such as institutions networking around the world. He further touched on Ankara-Washington relations and echoed U.S. President Barack Obama's sentiments that Turkey and the U.S. can develop a "model partnership" based on values and ideals. Confirming that there is a "model partnership" between the two countries, Davutoğlu said the relations between Washington and Ankara are significant.

Kardaş, evaluating Davutoğlu's remarks, said that the model partnership does not mean agreeing on every issue, but giving prominence to the country's own interests.

"When Obama said 'model partnership,' the main goal is to end the debate that arose in the [George W.] Bush administration in the U.S. Today, having model partnership means to cooperate on issues that both sides agreed on, but still to prioritize each country's own advantages," Kardaş claimed.

High-level diplomatic visits started with Davutoğlu going to Irbil and Baghdad to hold talks with Prime Minister Haider al-Abadi of Iraq and Kurdistan Regional Government (KRG) President Masoud Barzani. During the visit, Davutoğlu announced that he invited Abadi to visit Turkey in December for a high-level cooperation meeting. U.S. Vice President Joe Biden visited Turkey in late November. The main agenda of the talks was the international coalition to halt ISIS, Washington's request to use Turkey's İncirlik air base for coalition airstrikes against ISIS. Diplomatic visits continued with Pope Francis coming to Turkey on Nov. 28. Turkish leaders and the pope touched on Islamophobia, the regional chaos that has killed many people and an important issue for Christians, namely the Istanbul-based Ecumenical Patriarch of Constantinople Bartholomew, who is the spiritual leader of the Orthodox Church, and Pope Francis signed a declaration to promote peace and understanding between Catholics and Orthodox Christians around the world. On Dec. 1, Russian President Vladimir Putin arrived in Turkey in tow to promise a vast increase in trade and closer relations despite sharp differences over the crises in Syria and Ukraine. During his visit, Putin announced the cancellation of the multi-billion dollar South Stream gas pipeline to Europe, saying instead that Russia would work with Turkey on a new gas hub. Davutoğlu paid an official visit to Greece on Dec. 5 and both countries' leaders emphasized the importance of developing relations despite the remaining differences. Lithuanian President Dalia Grybauskaitė arrived in Turkey and stressed Lithuania's support for Turkey in its EU accession process. High Representative of the EU for Foreign Affairs and Security Policy Federica Mogherini, Enlargement Commissioner Johannes Hahn and Humanitarian Aid Commissioner Christos Stylianides traveled to Turkey on Dec. 8-9 in one of the highest profile EU visits in years to hold talks on ways to cooperate more closely in the fight against ISIS and Turkey's EU accession process. British Prime Minister David Cameron paid an official visit to Turkey on Dec. 9 and the main focus of the talks was foreign ISIS fighters traveling from Britain and using Turkey as a transit point to join ISIS militants.