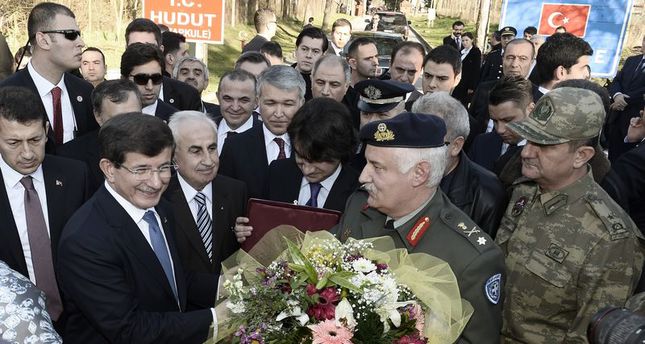 by Daily Sabah Dec 25, 2014 12:00 am
During his visit to the northwestern Turkish city of Edirne, Prime Minister Ahmet Davutoğlu held a phone conversation with Greek Prime Minister Antonis Samaras in an unprecedented move and conveyed his greetings for Christmas. Davutoğlu also went to the Pazarkule border crossing on the Turkish-Greek border and held talks with Turkish soldiers on duty and called their parents. He then shook the hands of Greek soldiers on duty and the Greek soldiers presented Davutoğlu with Christmas gifts.

In a statement released on the Prime Ministry's official website on Wednesday, Davutoğlu wished a merry Christmas to Turkey's Christian citizens. "Different faith groups have celebrated their special days and festivals and shared the joy and happiness in these lands. Our greatest desire is to celebrate and live these traditions, which beautify community life and enrich the bonds between people," Davutoğlu said in the statement.

Davutoğlu also mentioned that the cultural and faith-based diversity in Turkey enriches the society.

"I would like to wish a merry Christmas to Turkey's Christian citizens as well as Christians throughout the world," Davutoğlu added.

Christmas is celebrated annually and observed commonly on Dec. 25 as a religious and cultural celebration of the birth of Jesus Christ, among those belonging to the Christian faith. The Christian community in Turkey, although previously neglected, has been part of the government's agenda on refining relations with minorities living in Turkey. The country has vastly invested in the restoration of churches and religious buildings that were previously confiscated and returned them to minority foundations. Authorities have also called on the Christian and Jewish citizens of Turkey who have left the country due to discriminations against them in the past.