Ankara and Baghdad determined to cooperate against ISIS threat in region 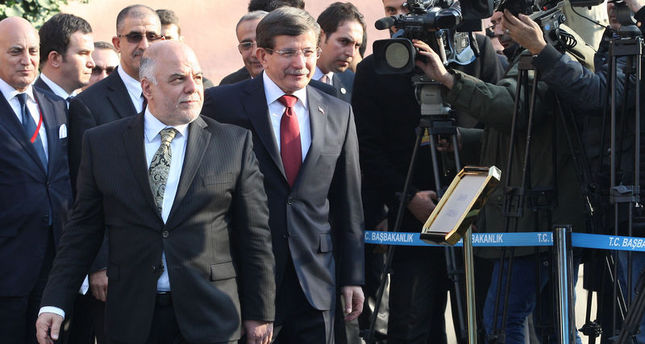 Turkey and Iraq are looking to develop bilateral relations amid the chaotic atmosphere dominating the region due to the self-proclaimed Islamic State of Iraq and al-Sham (ISIS), which controls large swathes of land in the region.

Abadi and Davutoğlu held a meeting and later gave a joint press conference in which Davutoğlu said that security is the main topic of the visit.


"Against all terrorist organizations in the region, [Turkey-Iraq] are in cooperation," Davutoğlu affirmed, noting that Turkey is ready to give all necessary support to Iraq in its fight against ISIS.

Explaining that the talks carry historic importance, Davutoğlu said: "We see Iraq's security and stability as if it was Turkey's security and we are determined to give all necessary support to ensure the security in Iraq."

Highlighting that Iraq seeks to develop cooperation with Turkey in all fields from the economy to the stability of the region, Abadi said ISIS's control of territory in the region is weakening.

Abadi thanked Davutoğlu for its support to fortify Iraqi forces in training and equipping.

Referring to the sour relations between Iraq and Turkey during former Iraqi Prime Minister Nouri al-Maliki's term, Abadi said that Iraq is determined to develop relations with Turkey in all fields.

Ahead of his meeting with Davutoğlu, Abadi and Parliament spokesman Cemil Çiçek held talks on regional issues. After the meeting, Çiçek said that ISIS is a problem for the entire region and urged all countries to cooperate in the fight against the terrorist group.

Touching on the conflict with the PKK throughout the 1980s and 1990s, Çiçek said that while battling ISIS, the PKK is trying to receive sympathy in the region.

"[The PKK] is like a wolf in a sheep's clothing, but it should not be forgotten that it is a violent wolf," Çiçek said.

He continued that the incidents in the region showed the importance of developing relations between the two countries and cooperating to end terrorist activities in the region.

"We are also experienced in these pains [in reference to the PKK]. Even though it has stopped for now, there is always likelihood of going through it again," he added.

He also praised the new inclusive Iraqi government and said that the duty the new government took is important both to the region and Turkey.


Abadi's visit came after Davutoğlu's November trip to Iraq and the Kurdistan Regional Government (KRG). During his visit, Davutoğlu announced that he invited Abadi to Turkey as part of the second summit of the Turkey-Iraq High-Level Strategic Cooperation Council (YDSK) on Thursday.

The YDSK was established in 2008 and its signing took effect in the context of the 48 Memoranda of Understanding in a broad array of cooperation fields, which created a long-term mutually beneficial strategic partnership between Turkey and Iraq through the development of bilateral relations in all fields.

November's visit was a direct indicator of the countries' efforts to fix the recent chilly ties and the leaders expressed their determination to revive positive relations. Abadi said: "The Turkish prime minister also wants us to have military cooperation in the face of terrorism and ISIS and we welcome that."

"I can say that ISIS is a threat to both Iraq and Turkey, but we will cooperate and do all we can to stand up to terrorism," he said.

Bilateral relations between Turkey and Iraq deteriorated during the time of Abadi's predecessor, Nouri al-Maliki, and his government. Ankara widely criticized Maliki for discriminatory policies against ethnic and religious groups that alienated Sunnis and helped lead to the rise of ISIS. Yet the newly formed government in Iraq appears to be attempting to fix the soured relations as sources said that the unexpected visit came after Davutoğlu called Abadi when he took office.

Speaking on Abadi's visit, Foreign Minister Mevlüt Çavuşoğlu said that the coldness between Irbil and Ankara is now over following the establishment of the new inclusive Iraqi government after Abadi assumed office.

Çavuşoğlu explained the problematic relations during Maliki's term in Iraq: "Every little thing evolved into a problem during Maliki's tenure."
He hailed Abadi's government and said that the new government is inclusive with Kurdish, Turkmen, Sunni, Shiite and Arab representatives.


"This is the way it should be," Çavuşoğlu added.