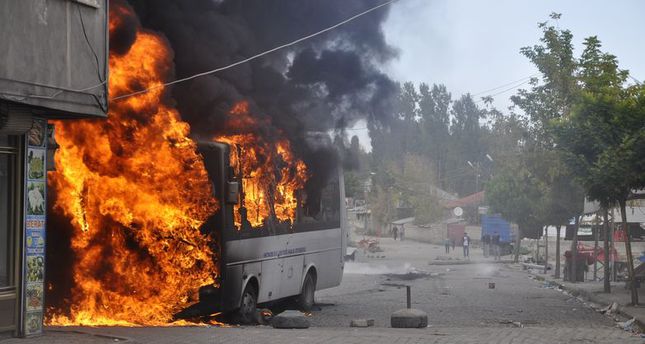 by Daily Sabah Dec 25, 2014 12:00 am
Some 156 workers, who were discharged from their jobs in the HDP municipality of Ağrı province, claimed they were laid off because they did not obey the municipality's order to "participate in the Kobani protests" on Oct 6-7.

Ramazan Arslan made a statement on behalf of the workers at a press conference on Wednesday and said the workers, who were recruited when the Justice and Development Party (AK Party) was running the municipality, had been subject to "intimidating" treatment, after the Peoples' Democratic Party (HDP) won the eastern province of Ağrı in the March 30 local elections.

The HDP municipality wanted to demoralize the 156 workers, who had been recruited during the time of AK Party rule, by assigning jobs to them other than those for which they were first hired, according to Arslan. "These people, however, kept working at their reassigned positions for a living," he said.

He said the workers did not quit their jobs despite the municipality's constant pressure. The HDP municipality wanted to have the workers participate in the Oct. 6-7 Kobani protests, Arslan claimed, which began after the party called for street demonstrations in an attempt to support Syrian Kurdish fighters in Kobani. The protests, however, later morphed into fierce clashes between pro- and anti-PKK groups, taking nearly 40 lives.

Arslan said, "We were forced to participate in the Oct. 6-7 Kobani protests. And when we did not consent to it, we were laid off."

All of the 156 workers were dismissed from their jobs without being compensated with any indemnity, Arslan claimed. The HDP then hired people close to its own ideology for the vacant positions, he said.

Sırrı Sakık, who was elected mayor of Ağrı in the 2014 local election, rejected Arslan's claims, saying: "We only discharged the guards of the previous mayor and those who got a paycheck without even coming to the workplace."

Arslan responded to Sakık's argument saying the 156 laid off workers could not all be the mayor's guards. "We absolutely deny that," he said.

The dismissed workers were all hardworking employees, according to Arslan, who were drivers, cleaning personnel and guards.

According to Arslan, the mayor slandered the 156 workers by declaring them all "guards" or "ATM employees" and said the mayor's statements were "remorseless." The workers are calling for an apology from the mayor, he said.