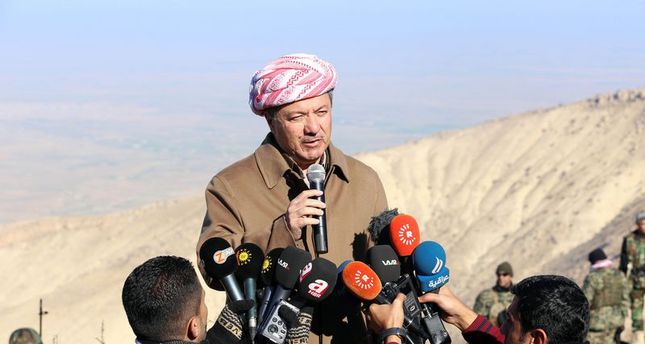 by Daily Sabah Dec 26, 2014 12:00 am
Kurdistan Regional Government (KRG) President Massoud Barzani has criticized Peoples' Democratic Party (HDP) leader Selahattin Demirtaş over his suggestion that a 'canton' should be applied to the Iraqi town of Sinjar. The town had been held under siege by ISIS militants, but the siege was lifted following the intervention of peshmerga fighters.

Demirtaş's suggestion of a separate administration for the town of Sinjar in Iraq's Nineveh province infuriated Iraqi Kurds who responded to the proposal with a strong statement.

The Kurdistan Democratic Party (KDP)'s parliamentary group targeted the leader in a written statement released on Friday, saying "No one, other than people of Sinjar, Kurdistan Regional Government (KRG)'s official institutions and those who shed blood for the sake of rescuing the town, has a right to make comments on the town of Sinjar."

The self-proclaimed Islamic State of Iraq and a-Sham (ISIS) had been in control of Sinjar, which is 77 miles west of Mosul - where the group began its large-scale campaign that tore through Iraq - until Kurdish Peshmerga fighters succeeded in taking control of the town following three days of clashes.

The statement released by KDP also alluded to Cemil Bayık, one of the founding members of the KCK – an umbrella organization of the outlawed PKK – who recently underscored territorial integrity in Iraq. KDP also targeted Bayık in the statement, for his critical comments, with a single question reading 'Who does this serve?'

"While the peoples of the free world, those who fight against terrorism and the entire population of the Kurdistan rejoice at the victory of the peshmerga forces and see it as a source of hope, unfortunately, some circles utter words that serve no benefit for solutions to the problems of the Kurds and in fact please those who feed animosity against Kurds," the statement read, referring to Demirtaş's comments.

The statement, which highlights that the people of Kurdistan have opposed the division of its territory for a long time, further reads: "Instead of celebrating the victory achieved by the bloodshed of peshmerga fighters, he proposes a 'canton' for Sinjar. Sinjar is a significant part of the struggle against the division of Kurdistan's territory."

Sinjar, also known as Shingal, is a town in Iraq's Nineveh Province near Mount Shengal close to the border with Syrian Kurdistan, which Kurds call Rojava. Its population in 2013 was estimated at 88,023. The town is mainly inhabited by Yazidi Kurds with Arab and Assyrian minorities.