No one in Turkey jailed for journalistic activity, says Erdoğan 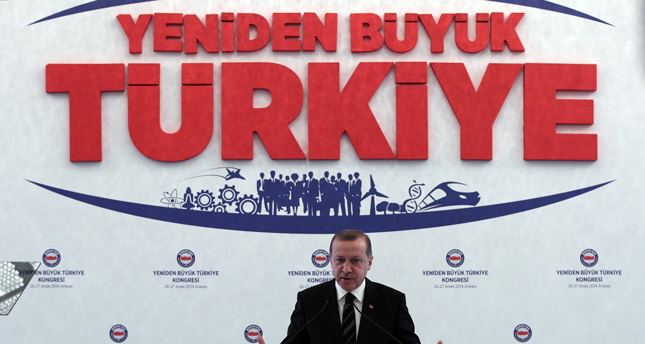 by Daily Sabah Dec 27, 2014 12:00 am
President Recep Tayyip Erdoğan, in his speech at the Great Turkey Symposium in Ankara on Friday, said that the media in other countries around the world is not as free as it is in Turkey. Touching on claims of censorship on media in Turkey, the president spoke about the journalists who were arrested and said, "There are only seven arrested journalists in Turkey and I should make it clear that the reason behind their arrest has no relevance to journalistic activities, but rather their connection to terrorist organizations."

Erdoğan said, "if journalists commit a crime, they should pay the price for it," before adding that "it is not possible to say 'they are innocent' when they have committed a crime." Erdoğan said that the country has progressed in the area of press freedom since the previous century. The allegations that Turkey arrests journalists came after the Dec. 14 Tahşiye operation when Gülen Movement-linked police and media figures were detained. The Dec. 14 detentions were part of an investigation, referred to as the "Tahşiye case," into the illegal activities of the Gülen Movement, led by the U.S.-based imam Fethullah Gülen. Members of the movement, also called "Gülenists," are suspected of perpetrating criminal activities through their operatives within the state, especially the judiciary, police and media. The Dec. 14 operation was the result of complaints filed against the Gülen Movement by several individuals from the so-called Tahşiye group, which was allegedly victimized by the movement. The prosecutors who handled the case conducted an investigation and found that the complaints had merit and that the evidence against Gülen's rival was forged as part of a concerted campaign, with police and media angles. Following the operation, Gülenist media asserted that the government silenced them with the detention, but Turkish officials strongly denied those claims saying that the reason why they were arrested was illegal activities by infiltrating key governmental apparatus.

Erdoğan criticized the "double standards" of Western countries against Turkey, referring to the Ferguson riots, saying that journalists were detained during the Ferguson riots and a reporter of the state-run Anadolu Agency (AA) was detained and tortured, but it was dismissed.

He described the stance of Western countries toward the freedom of press issue as a "double standard," and brought up the closure of British tabloid News of the World, which was in circulation for 168 years, in 2011 due to wiretapping activities and the censorship against the British daily Guardian when National Security Agency official Edward Snowden published documents regarding the surveillance activities carried out by the NSA. The president further urged the West to self-criticize and added, "when they fail to self-criticize, they only harm their own reputation."