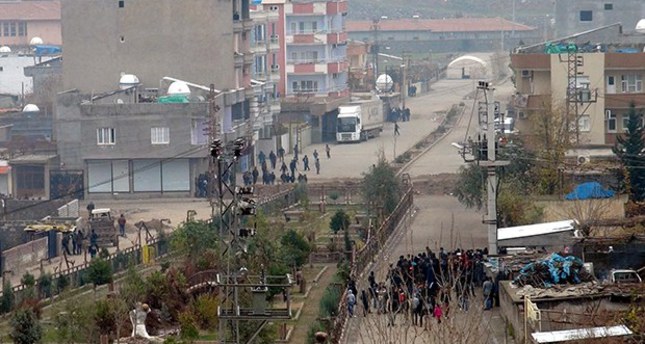 by Daily Sabah Dec 27, 2014 12:00 am
PKK radicals have reportedly set houses on fire in neighborhood located in Şırnak province's Cizre district where the members of the Free Cause Party (HÜDA-PAR), an opposition party that the terrorist organization claims of having links with ISIS, reside, leading to clashes between the two groups. Governor of Şırnak announced that two were killed and three were wounded in the clashes.

Barış Dalmış, 16 passed away at a hospital in Şırnak late on Saturday after he was hit in a random shooting by attackers, bringing the death toll to three.

The bodies of four Kurdish Syrian fighters known as the People's Protection Units (YPG) who were killed in clashes in Sinjar, an Iraqi town whose siege by ISIS was lifted following the intervention of peshmerga fighters, were brought to Cizre through the Habur border gate in the southeastern province of Şırnak late on Friday. Using the incident as an excuse to stage a protest, pro-PKK radicals reportedly attacked Nur neighborhood in Cizre where members of HÜDA-PAR reside, setting houses on fire and firing rounds on them.

The protests which erupted roughly around 3:00 a.m were later broken up by security forces. Police and gendarmerie teams were dispatched to the scene to intervene and ease the tension.

After the clashes HÜDA-PAR Chairman Hüseyin Yılmaz blamed PKK in a press conference at the party's headquarters in Diyarbakır, saying "Whenever there is a positive step regarding the reconciliation process, some circles in PKK and YGD-H are using violence against our party as a tool to sabotage the process. "

Yılmaz also stated that all parties in the reconciliation process have to acknowledge the fact that HÜDA-PAR is a political factor in the region and the party will not give up on its political rights despite the provocations.

The assailants are reportedly aiming for a recurrence of the pro-Kobani protests that erupted on Oct 6 claiming dozens of life. PKK supporters who then complained that Turkish government was not showing enough support for the fighting in Kobani against the ISIS, were engaged in aggression and vandalism, leading to suspension in the peace talks the government and pro-Kurdish Peoples' Democratic Party (HDP) have been pursuing.

The government officials repetitively warned HDP to refrain from provocative discourse that might cause unrest across the country.

The sides however began from where they left with regards to the reconciliation process and recently announced things were back on track.