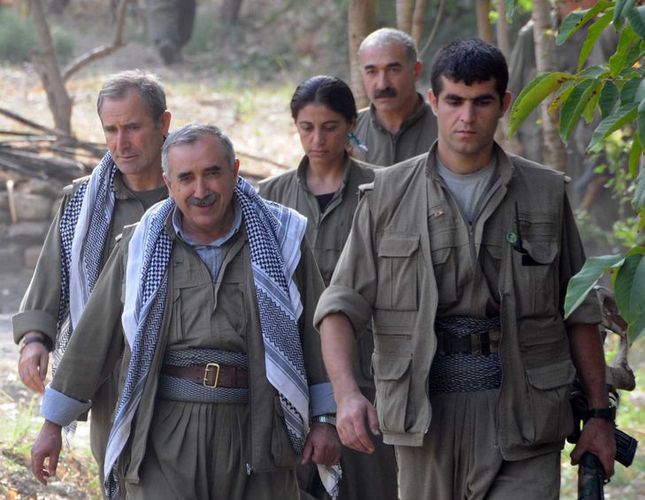 Following PM Davutoğlu’s remarks that the government has documents showing Gülen Movement’s connection to the PKK, a Prime Ministry source told Daily Sabah that the U.S. has used the movement to contact the PKK

Davutoğlu said that the government is well aware of the contact between the Gülen Movement and the PKK, and added that the public has a right to know.

"We have open and clear documents [regarding the contact]. This is not gossip. This is contact," Davutoğlu said. A high-level source from the Prime Ministry, who spoke on the condition of anonymity, said that they have solid evidence that indicates the Gülen Movement has contacted the PKK to facilitate communication between the U.S. and the terrorist organization. "As Davutoğlu stated earlier, there is direct contact between the Gülen Movement and the PKK, and they have recently established this connection to facilitate communication between the U.S. and the PKK," the source said.

According to a source, the U.S requested a communication line from the Gülen Movement due to the legal status of the PKK. "Many countries and bodies, including the U.S., the European Union and NATO, have classified the PKK as a terrorist organization therefore U.S. officials don't want to sit at the same table with them and would rather use the Gülen Movement as a conduit," a high-level source from the Prime Ministry said.

In response, a few days ago Kurdish Communities Union (KCK) Co-Chair Cemil Bayık spoke to IMC TV, saying that the PKK wanted to make contact with the Gülen Movement but the latter rejected.

Meanwhile journalist Kurtuluş Tayiz, who served 13 years in prison for being a PKK member, wrote that the Gülen Movement had made an alliance with the PKK.

Tayiz said, "I've learned that the Gülen Movement has made an alliance with the PKK in Northern Iraq. They are trying to convince the organization (PKK) to co-act with the CHP.

"In order to gain the confidence of the organization they are working in a quite devoted manner." Tayiz also claimed that the suggestion that the HDP should join up with the CHP ahead of the elections, under the name of the "Democratic Republican Party," is actually a result of the Gülen Movement.

Regarding U.S. involvement in the Kurdish reconciliation process as a third party, Bayık said in November that they would welcome the U.S. as a mediator. Following this incident, President Recep Tayyip Erdoğan claimed that the involvement of foreign elements in Turkey's domestic problems would yield no beneficial results, and only serve to exacerbate and complicate the process of finding solutions to the issues. "We cannot solve this issue with the involvement of the U.S. For years a British person acted as a mediator with Qandil [in reference to the Qandil Mountains, where some PKK leaders reside]. He was acting as a third party. He brought the process to an impasse instead of advancing it. Similar actors took on a role in Oslo, too. Again, it yielded no result. We have to handle our own affairs now," President Erdoğan added.

There have been allegations that ties between U.S. intelligence organizations and the Gülen Movement have roots in the recent past. Osman Nuri Gündeş, a former operative of the Turkish Intelligence Organization (MİT), said in his book, called "The witness of takeovers and anarchy," that in the 1980s Fethullah Gülen associated himself with fierce anti-communist circles in Turkey, supported by the CIA and the secretive network, Gladio, jointly. Gündeş also claimed that former U.S. Ambassador Morton Abramowitz defended Gülen and that Abramowitz ended up having trouble with U.S. immigration service.

WikiLeaks cables dated Aug. 4, 2005 also indicated that, Istanbul's Chief Rabbi Ishak Haleva debated whether or not to write a letter to Gülen in response to a request to "address the belief in parts of the U.S. government that he is a 'radical Islamist' whose moderate message cloaks a more sinister and radical agenda."

According to the cable, it was crucial to address the concerns stemming from FBI documents received by Gülen's supporters through a Freedom of Information Act (FOIA) request. Moreover, the cable said the FBI's attaché to the consulate in Istanbul, referred to as the Istanbul legat, "was also approached by police contacts with the Gülen Movement who asked that the bureau provide a 'clean bill of health' for Gülen."

The Gülen Movement is considered a national threat by the government after it was accused of wiretapping thousands of people, including Turkish government officials, encrypting phones and infiltrating state institutions with the aim of toppling the government. The movement is led by Fethullah Gülen who lives in self-imposed exile in the U.S. The movement is believed to be against the reconciliation process that began between Kurdish citizens and the Turkish state to end the decades-long PKK conflict in the state.