Turkey can avoid the middle income trap with determined efforts 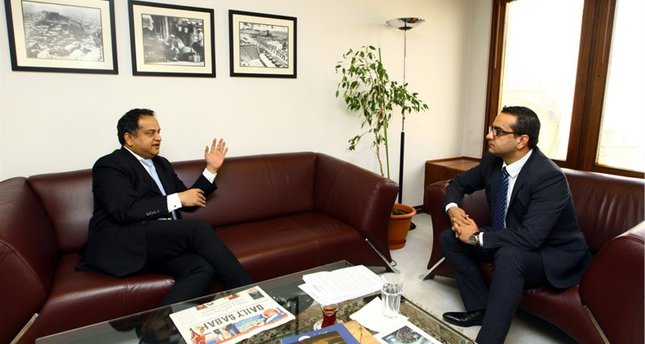 The IMF senior resident representative in Turkey, Srikant Seshadri told Daily Sabah that with determined efforts and an undefeatable resolve to further consolidate the progress made so far, Turkey can avoid the ‘middle income trap’

Turkey's relation with the International Monetary Fund (IMF) goes back to 1947 and, between 1961 and May 2008, Turkey signed 19 stand-by agreements. Even though Turkey was indebted to the IMF for many years, the country has not only paid back its loans, it is also actively helping global stability by committing to provide $5 billion to the IMF if resources are needed to fight any unexpected global turbulence. In spite of terminating credit relations, Turkey's relations with the IMF continue as with all member countries, whereby the IMF monitors its economic and financial policies. As part of this process, the IMF publishes regular reports on the Turkish economy known as Article IV consultations.

Daily Sabah sat with the IMF senior resident representative in Turkey, Srikant Seshadri, and talked about the IMF's most recent report on Turkey, the future of Turkish economy and critics of the IMF's economic policies.

Daily Sabah: According to the most recent IMF report, the IMF predicts that without a change in policies, future economic performance is likely to be weaker in Turkey than what it was in the recent past. How would you evaluate the future of Turkish economy from this point?

Srikant Seshadri: After growing at 6 percent per year on average from 2010 to 2013, the Turkish economy is currently growing at close to half that rate. Some of this is due to external conditions. However, part of this slowdown is also because the economy is facing structural constraints and also needs more investment and exports. These issues can be overcome with structural reforms to boost productivity and by increasing national saving. Higher national saving will make the Turkish economy more resilient to changes in global conditions by providing homemade fuel for investment and growth. Although falls in oil prices can provide a limited short-term boost to economic growth next year, they are not sufficient to provide a lasting solution. We are encouraged by the authorities' awareness of this and by their stated focus on disinflation, increasing national saving and on structural reforms. If these policy plans are appropriately prioritized, sequenced and fully implemented, they will have the maximum impact.

DS: The government has recently announced a nine-package plan of structural economic reforms. Do you think these reforms are sufficient to continue economic performance as it was in previous years?

SS: In its essence, the far-ranging and ambitious plans announced by the government focus on all of the right structural areas for the economy from increasing productivity and savings to rationalizing government expenditures, improving revenues and improving the business environment. This shows that the diagnosis is correct. The correct treatment will need to follow. This, as I said earlier, means prioritizing and enacting all of the structural reforms while boosting national saving. The international experience with structural reforms generally shows that patience is required for them to fully bear fruit. This is also why building a steady track record of prioritized implementation with results tends to succeed in keeping public faith in these reforms. It prevents reform fatigue from setting in.

SS: Turkey has some undeniable advantages that make its long-term economic potential bright – prime among them being a young population and a dynamic, entrepreneurial culture both at home and abroad. These days, one understandably hears about the difficulties in the neighborhood, yet Turkey's location is also one of its great blessings. Each of these advantages needs to be nurtured and harnessed for their full promise to be delivered. A young population needs a strong education system and high-skilled jobs. A predictable investment climate would help the private and the public sectors understand each other's' complementary roles in fostering growth and provide such jobs. It would provide both domestic and international businesses the confidence to view Turkey as the premier destination for long-term investment and for research that raises technological standards and Turkish exports. Thereafter, Turkey's location will almost automatically play to its full advantage, even at times when global conditions may not be ideal.

SS: Yes, with determined efforts and an undefeatable resolve to further consolidate the progress made so far. In Turkish, there is a proverb that tells us that even a mountain cannot endure purely on what lies ready. There are two things to remember about middle income traps. First is that unlike poverty traps, which are almost completely involuntary, middle income traps can be overcome with appropriate economic choices. Second is that the so-called middle income trap has been successfully overcome in a few other countries. And while every man has his own way of drinking yoghurt, the experiences of these countries have some things in common. As we have written recently, a necessary condition is higher national saving. The public sector cannot do this alone through fiscal prudence. The private sector also needs to do its part – individuals through personal saving and corporations through retained earnings. These changes in combination with disinflationary efforts that will help maintain the competitiveness of the economy will set the stage for more productive investment and durable growth. However, investment is not only a matter of money and machines. It also involves investment in human beings and their educational attainment. It also involves investment by highly skilled individuals in research and development to produce innovation.

DS: As you know, Turkey assumed the presidency of the G20 for the first time in its history on December 1 and pledged to fight global inequality during its turn at the helm. What do you think about Turkey's G20 priorities and is there any cooperation between the G20 and IMF?

SS: Turkey's G20 goals balance ideals with pragmatism in its three central priorities. First, through an emphasis on inclusiveness, it aims to give greater voice to low income countries. The concerns and needs of these countries should also be taken into account when the top 20 powerful countries decide on their economic policies. Second, the Australian presidency ended with G20 countries promising policy measures that would add more than $2 trillion to global gross domestic product by 2018. The Turkish presidency will focus on the implementation of these promises so that words turn into deeds. Third, the Turkish presidency will also look for G20 membership to deliver concrete strategies to unlock investment both for infrastructure and small and medium enterprises, or SMEs. With this agenda, Turkey has set for itself a beneficial role on the world stage. The IMF has always supported the rotating presidency of the G20 with its economic, financial and policy analyses. In partnership with other international organizations, the IMF will continue to provide such support and cooperation wherever helpful to the Turkish presidency.

DS: A common criticism of the IMF is its economic policies. Do you think that the IMF's orthodox economy policies failed to comply with the processes of change in developing countries? Does the IMF have an insufficient global surveillance and control mechanism?

SS: Our policy advice to emerging and advanced economies alike aims to attain sustainable growth while raising living standards and protecting social safety nets. This policy advice is constantly updated by learning from historical and cross-country experiences. In terms of modernizing our global surveillance to keep pace with a rapidly changing world we have made a pioneering effort to formally integrate into our policy advice and analyses, not only country-specific issues, but also how developments in one country affect the situations of other countries. This way, domestic policies in each country can also contribute to greater world stability. These efforts to modernize our global surveillance have helped us draw attention to the specific issues that emerging and developing economies face in today's complex and interconnected world. Our policy recommendations have also adapted where needed to changing global conditions. Examples of this can be seen with respect to recommendations regarding the management of volatile capital flows, regulation of global banks and growth-friendly fiscal policies, to name just a few.

Now, in cases when any country confronts a situation of extreme external or domestic economic imbalances, adjustment requires a return to sustainability of finances and often, international assistance. The pure arithmetic of returning to sustainability implies living within one's means and frequently involves difficult choices as can be readily understood by every individual who manages their own finances. International help in such circumstances can smooth the adjustment by temporarily providing resources while necessary measures are taken to return to sustainability. A careful examination of our lending programs over the last several years will reveal that the size of IMF assistance has been proportionate to the financing needs of each country that has made a request for assistance. Such a careful examination will also reveal that these programs have supported sustainable, growth-friendly policies to the maximum extent possible while balancing the need for a return to sustainability.