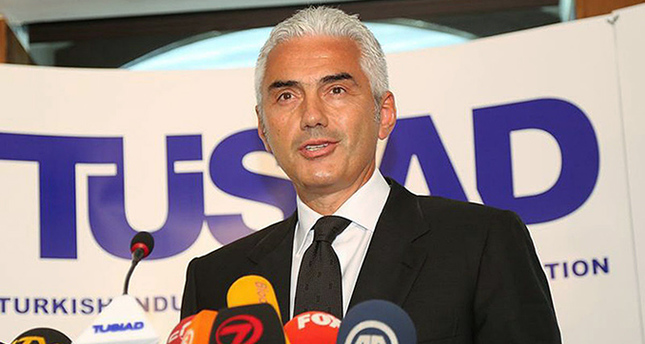 by Ali Ünal Dec 28, 2014 12:00 am
Turkey's leading business association, the Turkish Industrialist and Businessmen's Association (TÜSİAD), is having difficulties keeping its chairman on duty. The decision of the current chairman, Haluk Dinçer, to leave his post at the upcoming congress in January, follows former chairman Muharrem Yılmaz's resignation last June.

Former chairman Yılmaz resigned on June 4 over a labor crisis in his own company, dairy producer Sütaş. Turkish dailies reported that Yılmaz had been angered by Sütaş workers who had protested in front of the company's factory and had ordered 13 tons of animal feces to be dumped in the area where they were demonstrating.

After Yılmaz stepped down, Sabancı Holding Retail Chief Haluk Dinçer became the new chairman. However, several media outlets have reported that Dinçer is not expected to run as candidate for chairman at the upcoming annual congress on January 22, 2015.

Founded in 1971, TÜSİAD, usually called "the bosses club," has been influential in solving national problems since its foundation. In the 1970s TÜSİAD aimed to increase the legitimacy of the Turkish private sector in order to counter the rising left. In 1977 it prepared a report and accused then Prime Minister Bülent Ecevit of causing the balance-of-payments crisis and asserted that Turkey had lost its credibility in the West due to his government.

Despite its willingness to democratize the system and decrease the role of the military, TÜSİAD supported the 1980 coup as well as anti-democratic laws and the Constitution that was drafted after the military intervention. In 1997 TÜSİAD reacted strongly against the Islamist Welfare Party (RP) and organized demonstrations against the coalition government led by the RP.

The organization also supported the 1997 military memorandum, called the post-modern coup that refers to the decisions issued by Turkish military leadership in a National Security Council meeting on February 28 1997. The February 28 military memorandum ended with the resignation of the leader of the RP, Necmettin Erbakan, from the Prime Ministry and caused years of political turmoil in the country.

However, since the 2000's TUSİAD started to lose its influence in Turkish politics and well-known figures of the organization such as Asım Kocabıyık, İnan Kıraç, Yalım Erez, Turhan Gençoğlu and Hasan Arat left the association due to various disagreements with the TÜSİAD management.

According to sources, TÜSİAD's Presidential Council tried to convince current Chairman Haluk Dinçer not to leave the post, but their attempts to convince Dinçer have seems to fail. After Dinçer leaves, TÜSİAD board members Cansel Başaran Symes and Şükrü Ünlütürk are seen as the favorite candidates for a new chairman.