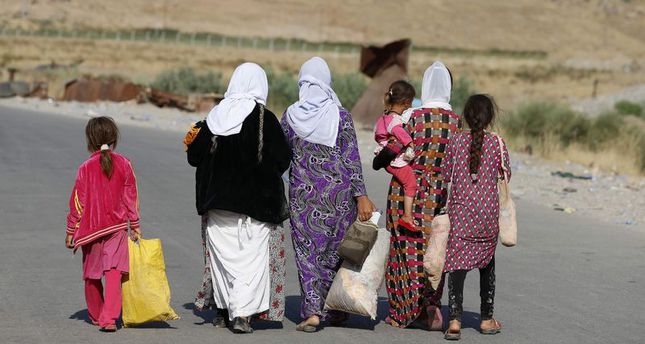 by Fatih Şemsettin Işık Dec 29, 2014 12:00 am
Turkey's open-door policy for refugees has been evaluated and explained chronologically in detail In a report published by the Center for Middle Eastern Strategic Studies (ORSAM) this December.

Penned by Firuze Yağmur Gökler, the report stresses that "Turkey has continued to implement its open-door policy regarding humanitarian crisis situations" and "has been delivering humanitarian assistance since the beginning of the attacks" conducted by the self-proclaimed Islamic State of Iraq and al-Sham (ISIS).

After Yazidis took sanctuary in the Sinjar Mountains following the capture of Sinjar by ISIS, the report points out that Turkey stepped up action for them by preparing large aid packages delivered by Iraqi helicopters with the coordination of the Prime Ministry of Disaster and Emergency Management Presidency (AFAD). Those who could flee to Turkey were placed in several districts of Turkey's border towns and the report indicates that "a workshop was established for Yazidi families' children in Diyarbakır's Sümerpark common living areas in which 80 children aged 7 to 13 received drama, intelligence games, art, Kurdish language and music education."

The 30,000 Yazidis that took sanctuary in Turkey also received aid with campaigns organized by the Humanitarian Relief Foundation (İHH), Red Crescent and Federation of Syriac Associations (SÜDEF), according to the report.

Along with Yazidis, 192,043 Syrian Kurds who fled from ISIS attacks in Kobani also took Turkey's helping hand, says the report. "From the first day of their arrival in Turkey, many government entities, civil society organizations and local authorities in the country started providing aid to Syrian Kurds who fled to Turkey and were in a difficult situation," the report says, adding that a reception center in the Yumurtalık region of the Suruç district was established by AFAD on Sept. 26, 2014.

The report remarks that a six-step humanitarian aid process was implemented by AFAD and that medical care for the refugees was covered by the Health Ministry and Alliance of International Doctors. IHH's TL 2 million ($880,000) worth humanitarian aid and those from many nongovernmental organizations and local authorities are also noted in the study.

Besides these figures, the report pointed out the urgency for new camps, mobile hospitals in order to enable rapid response and ease the burden of hospitals in the region and mobile schools and volunteer teachers in order to provide refugee children with an education in their native language. The report recommends that the Turkish government encourage Yazidis and Syrian Kurds to return to their countries after the elimination of the ISIS threat.