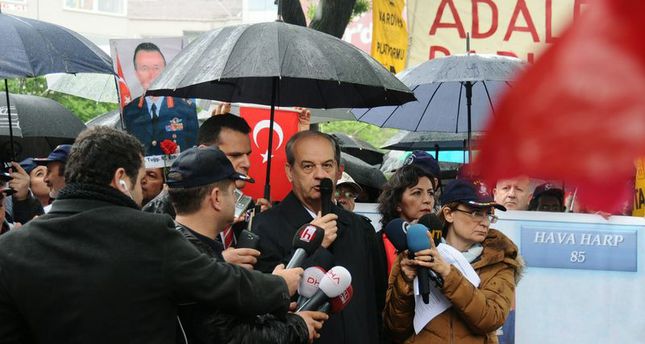 by Nurbanu Kızıl
Dec 30, 2014 12:00 am
İlker Başbuğ, the former chief of general staff, has stated that there is an unlawful organization within Turkish state institutions which was allegedly behind his imprisonment under the scope of the Ergenekon trial on charges of "attempting to topple the government" and "the establishment and administration of a terrorist organization." He made the statement in a televised interview on Monday.

Referring to the Gülen Movement, Başbuğ said "there is an illicit organization which extends to the military, the police and judiciary," noting that they are organized in a hierarchical manner. He stated that some of them could be in the Turkish National Army and other institutions and claimed that they may be supported by other actors.

Commenting on the Ergenekon and Balyoz cases, Başbuğ stated that he was informed about his arrest three days in advance. "On December 27, 2011 I received the news that I would be detained in a short while under the scope of the Ergenekon trial and the court submitted a criminal complaint against me on December 30, 2011," said Başbuğ, stating that he gave testimony on January 5.

Başbuğ claimed that it is presumed that there is a terrorist organization, but this cannot be proven with concrete evidence. "There is no such thing as an Ergenekon terrorist organization" he said, claiming that acts of violence and coercion were attributed to the fabricated organization in order to accuse them of attempting to topple the government.

He stated that three incidents should be clarified to properly understand the case, including the hand grenades thrown at Cumhuriyet daily's headquarters in Istanbul, the shooting at the Council of State and the hand grenades found in Ümraniye, a suburban district in Istanbul. Başbuğ claimed that precautions could have been taken in Şişli, where Cumhuriyet daily's headquarters were attacked, and alleged that the perpetrators behind the bombing and the homicide in the Council of State were the same people, but the Ergenekon organization was falsely accused with these crimes.

With regards to the hand grenades which were found in the attic of a shanty house in 2007, Başbuğ stated that there were a series of discrepancies with regards to the handling of the incident as the Turkish Armed Forces submitted a letter to the police but a day later were told that the bombs had been disposed.

Başbuğ also commented on the Balyoz case and stated that they have requested the establishment of a commission to investigate the case, while underlining that the expert report is significant for the case.

On Monday, Başbuğ announced he plans to file a lawsuit regarding the investigation, which targeted the Turkish National Army and its staff. He had received a life imprisonment sentence under the scope of the Ergenekon coup trial pending appeal.

The Ergenekon case has resulted in the indictment of around 300 people, accused of being members of a terrorist organization in 2011. The prosecutors who originally handled the case were Zekeriya Öz, who allegedly has ties to the Gülen Movement, Mehmet Ali Pekgüzel and Nihat Taşkın.