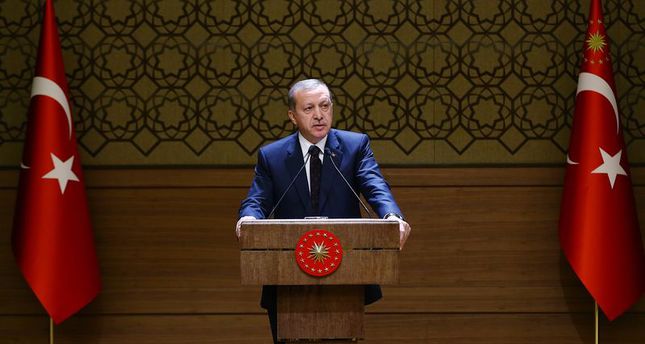 by Nurbanu Kızıl Dec 31, 2014 12:00 am
President Recep Tayyip Erdoğan has stated that the reconciliation process, which he referred to as the National Unity and Brotherhood Project, has proceeded in a determined manner in 2014 despite provocations and sabotage attempts. The message was published on the official website of the Presidency of the Republic of Turkey on Wednesday as part of his new year message, and highlighted the significance of Turkey's reconciliation process for the future of democracy in the country.

Erdoğan pointed out that those who try to exploit and sabotage the reconciliation process through violent street protests, conflict, blood and tears will receive the necessary response under the scope of democracy and the rule of law. He highlighted that the reconciliation process is the biggest social and brotherhood project of Turkey to date and the country will continue to proceed with this project to embrace all citizens with patience and determination.

Erdoğan noted that, although Turkey has witnessed a number of sad incidents at home and abroad in 2014, it has been a year which increases hopes about the future.

"We have clamped together as a nation with 77 million citizens as brothers and sisters against troubles and issues that we have faced in the past year and tried to find peaceful resolutions to our problems" said Erdoğan, who expressed his gratitude about Turkey's ability to cover a distance in terms of resolving issues.

The president also highlighted that 2014 marked a milestone for Turkey's democratic history as it marked the first time the president was democratically elected through popular vote on August 10.

"None of the crises which have occurred in the past during the election of the president took place this year and the president was elected in a transparent manner through the ballot box" he said, claiming that this has significantly strengthened democracy and national will in the country. He also noted that the presidential elections were the best response possible to the coup attempt which has taken place in December 17, 2013 and proved that Turkish governments will no longer be disposed through undemocratic methods against the national will.

"From now on, Turkey will spend its energy on development and prosperity of the nation rather than wasting it on endless and unnecessary debates" the president said, noting that Turkey will also continue to pay attention to the crises in the region and lend a helping hand to the oppressed despite the world's apathy.

"As 2023 is approaching, our excitement increases as our hopes, efforts and struggle gain strength" Erdoğan was quoted as saying, who continued by expressing that Turkey will not let perpetrators endanger the democracy, economy, Turkey's peaceful foreign policy and domestic stability and prosperity.

Erdoğan expressed his condolences for the citizens who died in 2014 with special emphasis on those who were killed by the mining incidents of Soma and Ermenek, as well as the Kobani protests which took place in October. He also commemorated the martyrs who have fought in Turkish independence battles in the past.

The president expressed his wishes that 2015 will be a year filled with peace, prosperity and goodness for the Turkish nation while he saluted all citizens with love and respect.