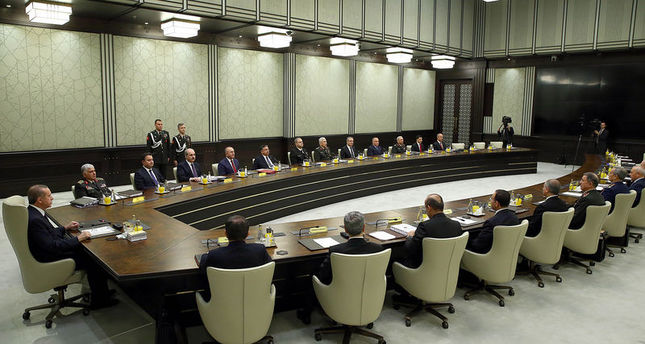 by AA Dec 31, 2014 12:00 am
During the final National Security Council meeting of the year Tuesday, Turkey's top officials pledged to continue the fight against the "parallel state" and proceed with the "solution process."

In a written statement, the council, which includes President Recep Tayyip Erdogan and Cabinet ministers, said that steps to combat the alleged illegal networks would continue. The government claims that supporters of the so-called Gulen movement have infiltrated the state and are attempting to overthrow the government.

On December 14, a police operation was launched against senior media figures and police officers in 13 provinces across Turkey for allegedly being affiliated with what the government describes as the "parallel state," an alleged group of bureaucrats embedded in the country's institutions, including the judiciary and the police.

More than 20 suspects were taken into custody, alleged to be linked with U.S.-based preacher Fethullah Gulen and his so-called Gulen movement, also called Hizmet, or "Service."

The government denounced the probe as a "dirty plot" constructed by a "parallel state."

The newest developments in the "solution process" were also discussed at the meeting, according to the statement.

The "solution process" refers to the Turkish government's steps to end the decades-long conflict with the Kurdistan Workers' Party, or PKK, a conflict that has claimed more than 40,000 lives. Turkey, the U.S. and the EU list PKK as a terrorist organization.

The statement also condemned Israel's violence against the holy areas of the Muslim world in Jerusalem and its human rights violations against the Palestinian people. The council also praised the international support for an independent Palestinian state.

"The rise in racist and Islamophobic attitudes against immigrant Muslims in Europe and in crimes such as mosque arson attacks, harassment, physical attacks and hate speech against Muslims are worrisome developments," the statement said.

The statement also emphasized Turkey's contribution to the international campaign against the militant Islamic State of Iraq and al-Sham (ISIS) group and praised Turkey's positive relations with the new Iraqi government.