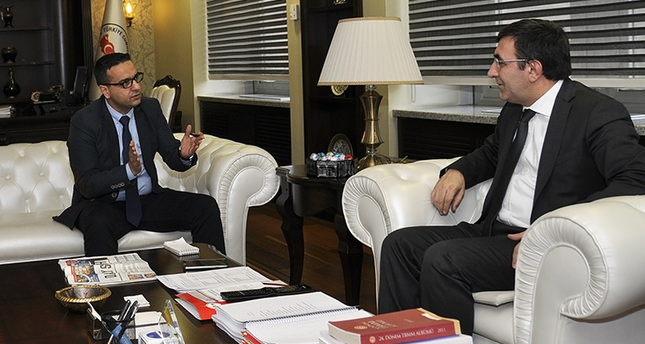 Development Minister Cevdet Yılmaz, in an exclusive interview with Daily Sabah, said that the shift away from populism is the ruling AK Party’s greatest contribution to Turkish politics

In 2014, Turkey witnessed two historical elections and numerous regional crises that caused great unrest regionally. Despite this turmoil, the Turkish economy continued its upward trend, while the expected gross domestic product closes the year with slightly more than a 3 percent growth. Additionally, the government has recently announced the first of nine programs of a detailed economic reform plan with ambitious economic goals, which is expected to boost the Turkish economy.

Although it is not widely recognized by the public, the Ministry of Development plays a vital role in the preparation of the economic programs, setting the goals and transforming the Turkish economy. Daily Sabah spoke with Development Minister Cevdet Yılmaz, and talked about his 2014 assessments, future prospects and economic and social reforms.

Despite the political turmoil and regional crisis, Yılmaz described 2014 as good year for Turkey's economy. "There were two elections in Turkey in 2014, mayoral elections in March and the presidential election in August. We have overcome attempts to overthrow the elected government. Despite these negatives, the Turkish economy has grown by 3 percent. We have continued growth for 20 quarters. Even with two elections, our national debt to national income ratio continues to decrease," he said. In recent months, the unemployment rate soared to two digits, but according to Yılmaz, this increase is also a positive indication. "The latest figures indicate that there was a 1.2 million increase in employment in last year. Nevertheless, in recent months, unemployment soared due to an increase in participation of the labor force. This increase is also a positive indication. It shows that more of our people are participating in the economy, thus placing their trust in our economy." Yılmaz also asserts that employment creation is one of the fields that the Justice and Development Party (AK Party) government considers the most successful. "Since the global crisis, the field we are most successful in is employment. Our economy is continuing to grow and to provide employment. While many other countries suffered a loss in employment, Turkey was one of the rare countries to increase it.," he said. Healso added that despite the downward revision of growth figures, Turkey's economic growth is mostly based on foreign demand and described it as healthy and sustainable.

According to Yılmaz, a positive improvement in main macroeconomic indicators will continue in 2015, and the future prospects of the Turkish economy will be brighter this year. He said: "The current account deficit is expected to be 5.7 percent by the end of the year. With the drop in oil prices, a recovery is expected in this field in 2015. As Ministry of Development, we projected a 1.8 percent decrease in the current deficit, accepting the oil unit price as $60. Therefore, this is a comforting development. The decline in oil prices also will positively reflect on inflation and growth. According to our calculations, it will boost growth by 0.4 percent."

Yılmaz said that the change in oil prices results in both positive and negative outcomes, and underlined that in their economic forecast, they tried to clarify these effects. However, he does not agree with the argument that Turkey's export will decrease due to expected trade downturn with oil exporting countries. "It's obvious that a drop in oil prices will decrease the demand of oil exporting countries. However, we also have the European market which is also dependent on oil. The decrease in oil prices, therefore, will have a positive effect on Turkey's economy. The best thing that Turkey has done in the last 10 years is the diversification of its markets. A negative development in one can result in a positive outcome in the other. We do not foresee a decline in export due to the decreasing oil prices. There may be a decline in export with some countries, such as Russia. In general, there won't be a decline in export. Oil-exporting countries have reserves; because they are prepared, they will not be affected much. The decline in export with the unprepared countries will be compensated by positive developments on another market," he added.

Furthermore, Yılmaz underlined that they will not become complacent due to the drop in oil prices, but will continue structural reforms with great determination in 2015. In November, Prime Minister Ahmet Davutoğlu announced a comprehensive plan to boost Turkey's economy through wide-ranging structural reforms in various sectors, including trade, energy and health. In addition to these reforms, Yılmaz hinted that an extensive reform package regarding the unrecorded economy is on the way. "Preventing unrecorded economy is important in increasing productivity and stopping unfair competition. Therefore, we will continue to fight with the informal economy. We have prepared the new reform package and the action plan and the road map of this plan is also ready. Announcement of this reform plan will be made by the Prime Minister in the following days," he added.

The government's leniency in economic policies on the eve of elections, in other terms, populist politics, used to be one of the major problems of the Turkish economy. However, in recent years the AK Party government continued fiscal prudence despite elections. While we will experience the general election in June 2015, Yılmaz underlines that there will be no populist politics during the election, and adds that this is one of AK Party's most important contributions to politics. "We do not promise what we cannot do, and we do what we promise. This enforces trust and stability. This is one of the AK Party's tenets and I think this is one of AK Party's most important contributions to politics. Therefore, we have never resorted to this kind of election economy, and we do not intend to. Parties that do this have short-term expectations. However, we do not think only of 2015, but 2019 and 2023 as well. We come to our citizens with long-term programs. Naturally, our citizens do not give credit to those popular policies."