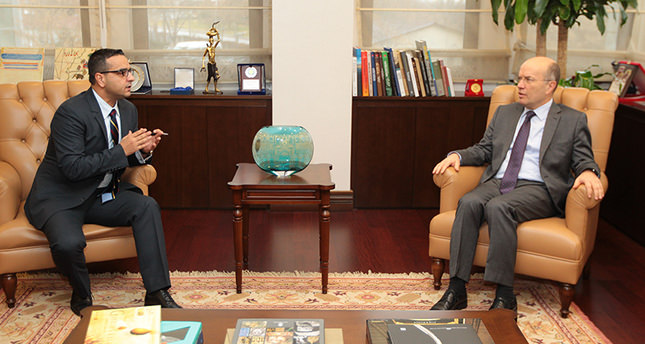 Deputy Minister of Foreign Affairs Naci Koru, in an exclusive interview with Daily Sabah, said that efforts to develop technological reforms were prioritized in the Foreign Ministry and the e-visa and e-archives projects would be introduced soon

Despite the Ministry of Foreign Affairs not being among the ministries that prioritize the use of new technology, in recent years the ministry has continued to make constructive and notable reforms by prioritizing the use of new technology. One of the most recent IT-related projects was the e-visa designed and introduced by Deputy Minister of Foreign Affairs Naci Koru.

The newly introduced e-visa is designed as an alternative to visas issued at Turkish embassies and at points of entry. Alongside the e-visa, the e-archives project will be introduced soon. This project aims to allow researchers access historical archives. Daily Sabah sat down with Koru and talked about the details of the latest projects in the area of e-governance.

DS: Since your appointment as deputy minister, the ministry came to the public with IT-related projects. Where does your interest in technology come from?

NK: Personal computers were just starting to be used during the early years of my career. I had my first PC on my first overseas tour while working in Austria. From the very beginning I realized that computer technology not only had a lot to offer towards making our lives easier, but also to daily bureaucratic conduct such as correspondence and consular affairs.

Today I see that the link between citizens and government has been changed profoundly by the recent developments of information technology. We are well aware of the fact that first-hand contacts between public bodies and individuals are gradually being replaced by digital practices. Therefore, we believe what saves time and energy, simplifies bureaucracy, enhances efficiency and upholds security is worth investing in since it will bring higher quality of services and in turn, greater citizen satisfaction.

NK: An e-visa is an official electronic document permitting entry into and travel within Turkey. Now, it takes only about three minutes to get a visa over the system.

A total of 39 million tourists visited Turkey in 2013, making our country the sixth most visited country in the world. Around 13 million of them had to have their visas before travel.

We are pleased to see that the system has grown into being the most popular and user-friendly way of delivering consular services relating to entry procedures. Less than one year has passed and we have issued over six million visas in electronic format.

The e-visa is an alternative to visas issued at Turkish missions and at ports of entry. It is a web-based application featuring the latest technologies in the area of e-governance.

Approximately, on average 10,500 people in winter and 40,000 in summer each day apply for a visa by using e-visa application system. Also, the reach out affect is truly remarkable.

An enormous amount of time is saved from handling foreigners' visa applications and a great amount of the workforce is now being allocated to the needs of Turkish citizens living abroad.

We have been able to reach out to the thousands of people who don't have a Turkish mission nearby. Statistics indicate that the number of visitors from these countries increased by 21.09 percent in the first half of 2014 compared to the same period in 2013.

DS: There are some other countries that have e-visa websites. What is different about Turkey's e-visa system?

NK: EVAS, our Electronic Visa Application System is unique. There has been some efforts by other countries at making use of web technologies in this area, however we can say that the merits of our approach remain unmatched. Obtaining a visa has never been easier. This is also being confirmed by the end users whose comments are available on the e-visa official web-site evisa.gov.tr.

In our system, visa applicants don't need to upload any documents to EVAS during the process. By entering their travel details and passport information they are able to proceed in securing their visas. The system offers a state-of-the-art secure payment system for transaction fees.

Applicants obtain their visas electronically by entering the required information and making payments by credit or debit card.

An enormous amount of time is saved from handling foreigners' visa applications and a great amount of workforce is now being allocated to the needs of Turkish citizens living abroad.

With the e-visa system, what was previously deemed to be impractical, unnecessary and even impossible has been accomplished. It has been made evident by this experience that the global character of the Internet spans beyond any form of dividing line. The endeavour demonstrated that it is worth investing in technologies whereby people from all over the world, coming from different walks of life, having diverse cultural, social and economic backgrounds are ensured to have the same quality of public services and are treated on an equal footing. Awareness of the fact that the Internet, when it is utilized with the right appreciation, can help governments transcend all kinds of difficulties. This evaluation is evident by the feedback given by users of a wide range of nationalities and various social and cultural settings.

It was encouraging to see that we mostly received positive feedback from users. As I specified before, each and every line written as comments or requests has been addressed and the feedback has provided strong guidance in improving the system.

Providing services to people from different countries has been a refining experience. Efforts and dedication for making life easier always proves rewarding. We offer the most precious benefit of all – time.

DS: How do you ensure the security of the system, do you have a plan to empower the infrastructure of the e-visa system by cooperating with cybersecurity experts or companies?

NK: The e-visa system has been built within our ministry's IT architecture and its security is ensured by extensive measures and the utmost of care is taken for all our systems operating within our network. Hence, our ministry, as an active member of the National Cybersecurity Board, is in close collaboration with major stakeholders in this area.

DS: How does the system work and how does it identify people who are banned from entering Turkey?

NK: Before the Electronic Visa Application System was introduced, visas could only be obtained by either application to Turkish Embassies or Consulates or, if one is eligible, at the point of entry upon arrival.

Foreigners who had to obtain visas had to line up in front of visa counters at airports in Turkey to secure their entrance into the country.

People, including those vulnerable, like those who are pregnant, children and the disabled, had to spend hours standing in lines after long and exhausting travel to get a visa. For instance, many tourists had to wait in front of visa counters at Atatürk Airport especially in the summer time, the busiest border gate in Turkey. The wait time depended on the type of passport and currency.

Now, I mean, since the system has been made operational, visitors can get their visas in around three minutes and this also includes security checks through the Interior Ministry's database. In only seconds the system completes the screening process that basically involves controls on whether any restrictions are applied on the person for previous offences or violations. Following the application, security checks and payment steps, e-visas are sent to applicants' given email addresses automatically. The link to download an e-visa document is delivered on the final step where the applicant will be informed of the application's successful completion. Passport control officers at our border ports of entry can verify an issued e-visa on their screens. However, just in case, visitors are advised to keep their e-visa with them either as a soft copy on a tablet or smart phone or as a hard copy in case of any failure of the network. By the way, I must say, as in the case of other kinds of visas, our border authorities at the ports of entry reserve the right to deny entry into Turkey for any e-visa holder. Such practices are exclusively under their considerations, for the issuing jurisdiction lies with them.

DS: Did any country come to us for consulting about this issue? Do you have plans for a co-project with a country on it?

NK: We are keen on sharing our experiences in this area as widely as possible. Not only do we maintain contacts on bilateral grounds, but also through the multi-lateral platforms including international organizations such as the Organization for Security and Co-operation in Europe (OSCE), Organisation for Economic Co-operation and Development (OECD), International Civil Aviation Organization (ICAO), EU and related U.N. bodies. Here, I must say, our e-visa application system stands out as among the best practices aimed at facilitating cross-border mobility, freedom of movement and efficient delivery of public services.

DS: You have recently announced via your private blog that the ministry's archives since 1919 will be opened to professionals through a private password. What is the latest regarding this subject?

NK: Among our efforts to keep pace with technology, the digitalization of our archives occupies a special place. Under the newly launched e-archives project, around 60 million documents will be scanned, classified and indexed and finally, a large part of them will be ready for researchers' studies. As of now, 250,000 documents have been processed – we have assigned over 200 experts for this project's success and are maintaining regular contacts with Turkey's scholarly circles.

DS: Digital diplomacy, also referred to as e-diplomacy, has become widely popular in recent years. What is your work in this field?

NK: We are fully convinced that the practice of diplomacy today is different than it used to be a century ago. As foreign policy issues have evolved deeply into daily domestic political debate, we came to see it as a two-way street as it gradually involved the public. Today, public outreach has a pivotal role for the successful conduct of diplomacy and making the best of social media tools are essential for effective public diplomacy.

When we look at the figures, we cannot be too modest with the success of the Foreign Ministry on this account. Our official Twitter account is the second most popular after the U.S. State Department with over 700,000 followers. Also, our ministry's website is visited by over four million users annually.

Furthermore, in the conduct of classical diplomacy, we are making the best use of new technologies. We have included our foreign colleagues serving in Turkey in embassies in Ankara and other missions throughout Turkey in our paper-free office network. Diplomatic notes are sent over the Internet. So, I believe, headlines such as: "Turkey gives a note to that country," could use an update like, "Turkey sends an e-note."

I want to highlight this practice since it is the first time diplomatic note correspondence has been brought to a digital format.

DS: Is there any other project or anything else that you would like to mention?

NK: I would like to thank you for this opportunity and also would like to briefly allude to our e-consulate system, employed for delivering e-government services to our citizens living abroad, our intranet, information management application, which features many utilities such as country databases, human resources applications and e-invitation.

Last but not least, our Electronic Document Management System, developed and used by our ministry since 2001 has become a successful application well-integrated not only between our missions around the world and our headquarters, but also with many other public institutions as well.