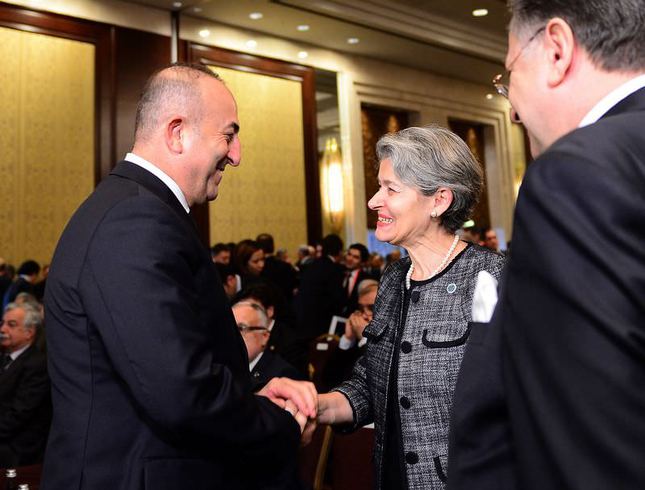 by AA Jan 05, 2015 12:00 am
The Director General of UNESCO hailed the "new Turkey" during her speech at the Seventh Annual Ambassadors Conference on Monday in Ankara.

Irina Bokova, the Director General of the United Nations Educational, Scientific and Cultural Organization, or UNESCO, said a 'new' Turkey is rising to lead its region.

"A new Turkey is rising: an influential economic leader, a bridge between East and West, a strategic power with the global voice. All these draw on the rooted history and diversity of Turkey," Bokova said.

"Turkey is aiding today some 1.6 million refugees from Syria. We see Turkey's leadership in strengthening multilateralism and its vision in human development," the director general said.

Turkey has adopted an open-door policy for civilians fleeing from war in its conflict-ridden neighbors, Syria and Iraq.

It has given refuge to at least 1.6 million Syrians since the beginning of the civil war in March 2011, and spent more than $5 billion on them so far.

"The challenges remain deep. Exclusion, poverty, conflict and new ones are emerging," Bokova said. "We are living at a time of a great change. Conflict has moved within countries."

Bokova also thanked the Turkish government for the $5 million financial contribution it made to UNESCO's Special Emergency Multi-Donor Fund in 2012.

"I wish to thank the government of Turkey for its resolute action to fight illicit trafficking of cultural artifacts across the region," she said. "I call on all parties to immediately stop all military use and targeting of cultural sites and I urge all actors to integrate the protection of cultural heritage and diversity into humanitarian and peace building efforts."

Bokova also talked about the situation in Iraq, explaining the main reasons she paid a visit to the country on November 2, 2014: "This is why I went to Iraq, to appeal for national dialogue across all cultural and religious lines to say these are the past of Iraq and it is essential to save the future of the country and our collective history."

Bokova also mentioned the importance of soft power to build cultural ties for "education, protection of culture and cultural diversity, the sciences, communication and information."

"This is the power to broker new ideas, to mobilize collective action for essential global roots," she said.

"We need approaches to build peace and this is why Turkey's strong partnership with UNESCO is so important," Bokova concluded.