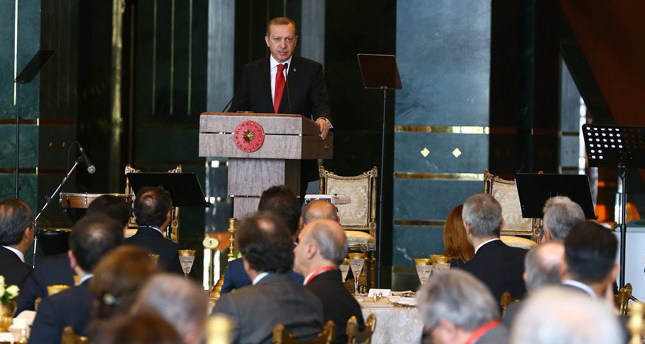 In his address to Turkish envoys from across the world, President Erdoğan said Turkey was proven correct in its appraisal of the Syrian civil war and called for the EU to adopt a more welcoming stance toward Turkey

President Recep Tayyip Erdoğan, in his address to envoys yesterday at the seventh Ambassadors Conference in Ankara, called on Turkish envoys to be aware of the black propaganda purported against Turkey by some foreign media outlets.

"You should stay strong against the yellow journalism in those countries. You are the representatives of the Turkish nation, you are the mission chiefs. You should never, ever make concessions," said the president.

He further said that the EU, which Turkey has been trying to join for decades, must revise its policies toward Turkey. "They have stalled us for a long time, they have caused us to lose time. It is a pitiful situation that the EU tries to give Turkey a lesson while it needs to realize the dangers and threat [against itself]," said the president. Turkey has been sitting at the negotiation table with the EU longer than any other candidate.

Turkey has been sitting at the negotiation table with the EU longer than any other candidate. The country handed its application to Brussels in 1987 and the accession talks began in 2005. However, negotiations hit a stalemate in 2007 due to Ankara's position on the Cyprus issue, in which Turkey does not recognize Southern Cyprus, which is an EU member country and has strongly opposed Turkey's EU membership with the French and German government.

To be able to classify as an EU member country, Ankara has to successfully finalize negotiations with the EU in 25 policy chapters that are required to meet EU standards. So far, only 14 chapters have been opened whereas 17 remain blocked and another four are yet to be discussed. In the last three years, only one chapter has been opened. Touching on the increasing Islamophobia, racism and discrimination in some EU countries, especially in Germany, Erdoğan claimed that activities targeting Muslims in those countries are at a point that is impossible to hide.

On the Syrian civil war, which started in 2011 and displaced millions of Syrians, the Turkish president highlighted that the Islamic State of Iraq and al-Sham (ISIS) threat in the region stems from the Bashar Assad regime and the discriminative policies by the then-Iraqi government. Referring to the anti-ISIS coalition, led by the U.S. to eliminate the ISIS threat in the region, Erdoğan said that it is not possible to end ISIS only through air operations and that boots on the ground is a must.

The president said that in a conversation with U.S. President Barack Obama, he had asked him, "Why is Kobani of such strategic importance?" The question was meant to poke a hole in the notion that the U.S. prioritized a small village, in which few people remain, when the rest of the country was at war, with hundreds of thousands dying at the hands of Assad.

Reminding that 2015 is the 100th year since the 1915 incidents, he said that Turkey is well aware that some circles will try intensively to bring this issue to the table. "It is also a good opportunity to evaluate and discuss the 1915 incidents. We are and will be putting in the effort to discuss the truths and to read the history," added Erdoğan.

Alluding to Armenia, the president said that even though the olive branch was extended by Turkey, Armenia is still trying to impose its own perspective.

Turkish-Armenian relations have remained strained for decades due to the 1915 incidents. Tensions peaked in 1993 when Turkey closed its borders with Armenia in reaction to the war in Nagarno-Karabakh.

Nevertheless, in April 2014 Erdoğan, who was then prime minister, made attempts to thaw the tensions between the two countries by issuing a message ahead of the 99th anniversary of the 1915 incidents. In an unprecedented move, Erdoğan extended condolences to the grandchildren of the Armenians who lost their lives in 1915.

Both Armenian society and international circles hailed the message, which read, "It is a duty of humanity to acknowledge that Armenians remember the suffering experienced in that period, just like every other citizen of the Ottoman Empire."