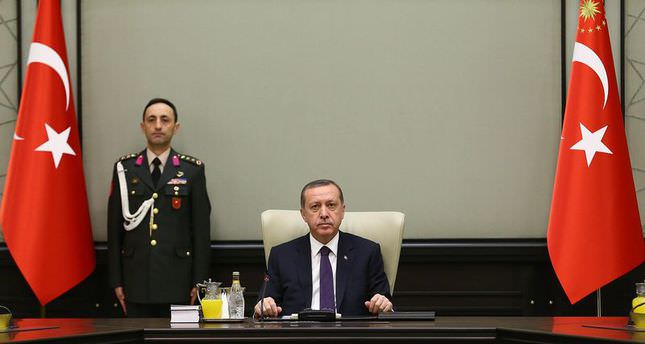 by Daily Sabah Jan 06, 2015 12:00 am
President Recep Tayyip Erdoğan has reiterated that the Gülen Movement will be included in Turkey's Red Book - a legal document that contains the country's security policies and is updated on a five-year basis - and will be recognized as a threat to Turkey's national security.

Speaking at a luncheon organized under the scope of a conference for ambassadors at the Presidential Palace in Ankara on Tuesday, Erdoğan stated that the December 17 and 25 operations would have cost more for Turkey if agents of the Gülen Movement were able to topple the government.

"With the most modest calculations, it can be seen that the December 17 and 25 operations cost Turkey $120 billion and this would have been more had they been successful" Erdoğan said. He underlined that democratically elected administrations cannot be toppled through blackmailing and fabrications.

Erdoğan also said "There is no freer press, either in Europe or anywhere in the world, than in Turkey."