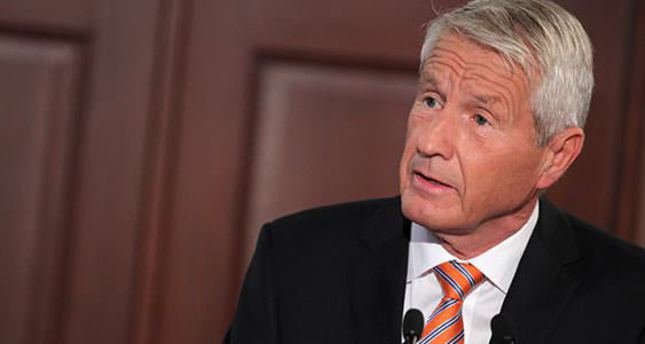 The secretary-general of the Council of Europe questioned the wisdom behind not allowing Turkey into the EU: ‘Who can say no to add 70-80 million new customers to the internal market?’ He also thanked Turkey for its financial contribution to the organization

Jagland said in a speech that Europe needed Turkey, and that Turkey needed Europe. "Turkey should take its rightful place in the European Union. Europe needs Turkey because Turkey is bordering one of the hot spots for Europe," he said.

Jagland also questioned the wisdom behind not allowing Turkey into the EU. "Who can say no to add 70 to 80 million new customers to the internal market?" he said, adding that Europe was witnessing "very worrying signs" in terms of economic and social situations.Jagland also said that since Turkey borders Syria, Iraq and Iran, it is very important for Europe to solve problems in that region.He also praised Turkey for hosting around 1.6 million refugees. "I come from Scandinavia," he said, "If we had around 5,000 to 10,000 refugees, there would be an outcry." Jagland described the ongoing crisis in Syria as the biggest scandal in the world after World War II. "We are in the 21st century, a civil war like this has been going on for four years. 200,000 people have been killed and 1.5 million refugees are in Turkey, millions of others in Jordan and Lebanon. How can it be?" he asked.

Jagland said that the "international machinery," including the U.N. Security Council, should be questioned as to whether it was functioning or not.

"Increasing unemployment, racism and Islamophobic thinking are huge threats for democracies," he said. Speaking at a conference of Turkish ambassadors, Jagland said: "I welcome the Turkish authorities' decision to allow the construction of a new Christian church in Istanbul as a sign of respect for religious diversity."