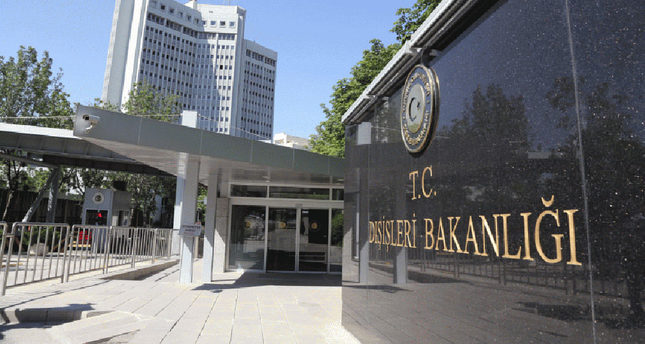 by Daily Sabah with Agencies Jan 08, 2015 12:00 am
Turkey's Foreign Ministry has warned Turkish citizens in Libya to evacuate the country "immediately" via a statement released late on Wednesday.
"Because of the conflict and the airstrikes in Libya recently, we are suggesting to our citizens to leave the country immediately," the statement said.

Turkey on Wednesday condemned as "unacceptable" and "irresponsible" a statement allegedly made by the Libyan Air Force in a Facebook post, warning that all Turkish civilian and military planes would be shot down should they enter Libyan air space.

"We advise once more our remaining citizens in Libya to quickly leave because of the unstable security situation and negative developments...in recent weeks," the Foreign Ministry said in a statement.

The warning came after Turkish Airlines suspended flights to Misrata this week, its only remaining destination in Libya, after it had earlier pulled its flights to the capital Tripoli as well as Benghazi and the inland desert city of Sebha.

Libya has been in chaos for more than three years after dictator Moammar Gadhafi was toppled and killed in a NATO-backed revolt. The country is awash with weapons and powerful militias, and has rival governments and parliaments.

The foreign ministry attacked the reported Libyan Air Force's statement, "which is against international law (and) is totally unacceptable."

It added that Ankara had raised the issue with the U.N. special envoy for Libya Bernardino Leon. "We strongly condemn this hostile statement targeting our country," said the ministry.

$19 billion of construction projects alone have been mothballed by Turkish firms because of the fighting, according to the Turkish Contractors' Association.

Libya has recently witnessed heavy fighting between a loosely organized national army and militias that held on to their weapons following a bloody uprising in 2011 that ended the rule of Moammar Gadhafi.