Ukrainian envoy to Ankara: Turkey can be an energy hub without Russia 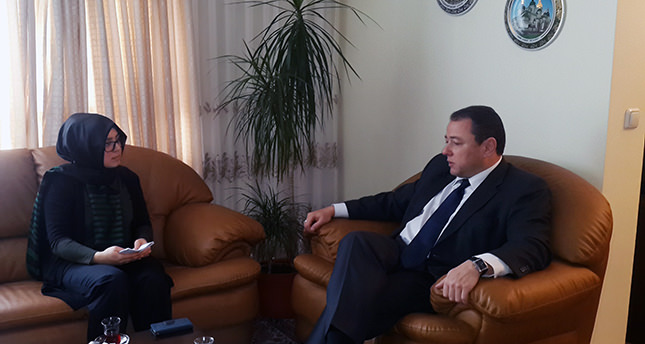 by Merve Aydoğan Jan 08, 2015 12:00 am
The ongoing conflict in eastern Ukraine continues to maintain its severity, mainly in terms of the worsening humanitarian situation. According to U.N. figures from December 26, 2014, the number of those who have been affected by the crisis reportedly reached 5.2 million, including 2 million children.

While the clashes between Ukrainian military forces and pro-Russian rebels continue, the tightened sanctions from the EU and U.S. have precipitated the Russian economy into a serious crisis. In efforts to revitalize its economy, President Vladimir Putin said that Russia will increase energy supplies to Turkey via the Blue Stream pipeline.

In an exclusive interview with Daily Sabah, Sergiy Korsunsky, the Ukrainian ambassador to Ankara said that although Ukraine understands the pragmatic relationship between Turkey and Russia regarding energy supplies, he advised Turkey not to be lured into a trap by Russia through energy talks. While Turkey's stance on the annexation of Crimea stands firm and Turkey is devoting efforts to ensure the safety of Crimean Tatars, Korsunsky said: "Russia will provide all possible offers in exchange for Turkey to recognize the annexation of Crimea."

Although supply and demand for energy is currently even more crucial, Turkey continues to repeat its support for the Crimea and Crimean Tatars. During the interview, the ambassador also said that if Turkey were to change its attitude toward the annexation of Crimea, it would be more difficult for Crimean Tatars to withstand Russia.

Korsunsky continued by emphasizing that "Turkey can be an energy hub without the Blue Stream pipeline." Korsunsky also explained that if the majority of the energy supply were obtained from Russia, then for financial institutions it would be difficult to finance Turkey to work with Iraq, Iran or Azerbaijan. Thus, "Russia is simply applying the similar strategy on Turkey that it has done on Bulgaria regarding the South Stream pipeline project. At the end of the day, Russia will abandon Turkey as well just like it has done to Bulgaria."

Putin announced during his visit to Turkey on December 1, that Moscow is scrapping the South Stream project, which was meant to supply 63 billion cubic meters of gas a year through Bulgaria, Serbia, Hungary, Austria, Italy and Slovenia.

Furthermore, regarding the possible meeting on permanent cease-fire talks in the Kazakh capital, Astana, on January 15, Korsunsky said they are optimistic: "Ukraine does not want to continue fighting with the rebels as it values the lives of its citizens in occupied territories. Thus, we would like to establish a permanent cease-fire and then begin negotiations with representatives from Russia and representatives from the rebels – if any. However, the peace process cannot be established if Russia does not shut its border to the rebels and does not stop supplying the rebels with heavy weaponry."

Meanwhile, President François Hollande of France and a spokesman for German Chancellor Angela Merkel have indicated they would only attend if there were an actual possibility for progress. Commenting on the statements by the French and German leaders, Korsunsky said that it should be evident to all leaders that the current crisis in eastern Ukraine cannot be resolved without EU efforts to push Russia to improve.

Commenting on the Ukrainian parliament agreeing to vote to drop the country's non-aligned status and its possible application for NATO membership, Korsunsky said that Ukraine becoming part of NATO is "a nightmare scenario for Russia since they consider it as a paramount enemy to themselves." Because the previous government of Viktor Yanukovych in Ukraine was in favor of the country's non-aligned status, Korsunsky said that the Ukrainian army was not prepared enough for an unexpected crisis such as the Russian invasion of Crimea, Donetsk and Luhansk. He said that the priority of Ukraine is not to apply for NATO membership right now, but instead to rebuild its military forces according to NATO standards.

Additionally, recent polls in Ukraine prior to the New Year indicate that the support of Ukrainian citizens to apply for membership in NATO has increased significantly. According to the Ukraine international research agency IFAK, over 50 percent of Ukrainians support joining NATO.

"Ukraine will work with every partner, including Turkey, to reshape all of our military forces according to NATO standards. We have also had a delegation from the Ministry of Defense and a delegation from the Presidential Office visiting Turkey to learn about Turkey's supply system and all the logistics in the Turkish Army's functioning. The adviser to President [Petro] Poroshenko as well said that we are very impressed by the Turkish Army and will use this experience," he said.

Emphasizing Turkey's importance to NATO and the Turkish military forces' prominent state, Korsunsky said that Ukraine is not seeking arms supplies, but instead the experience of being trained according to NATO standards.