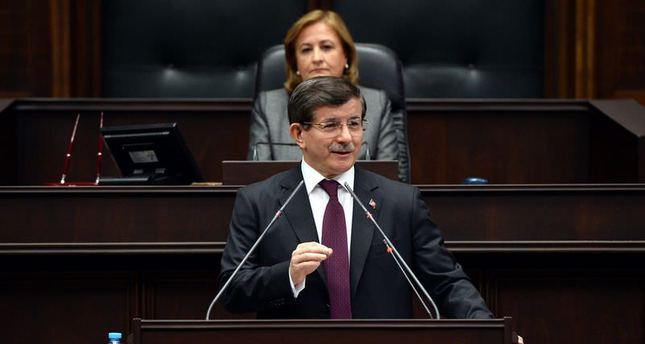 by AA Jan 09, 2015 12:00 am
Prime Minister Ahmet Davutoğlu has called on "Muslim Turks" to hold their heads high if they face any radical and Islamophobic reaction in the aftermath of the recent deadly attack on a French satirical magazine.

"It is high time for us as Muslim Turks to walk with our heads held high against all radicalism and rising Islamophobic attacks," Davutoğlu said at a dinner hosted on the sidelines of the Seventh Ambassadors' Conference in Ankara on Thursday.

He stressed that the Turkish people globally must proclaim their identity as Muslim Turks if they face any racism.

"All of us must tell our Muslim-Turkish identity without any hesitation," he said.

On Wednesday, Davutoğlu condemned the Paris murders as a terrorist act, reiterating Turkey's stance against terrorism and violence.

"It is necessary, now more than ever, for all countries to take a collective stance against such attacks as well as against racism and xenophobia. Then only will we achieve a world without terror and where cultural peace and mutual respect prevails," he said.

At the dinner, the premier noted that the perpetrators of the deadly attack and those who escalated tensions between peoples "both lived on the same resource."

Davutoğlu maintained that barbarism such as the Parisian murders led to terrorism, and terrorism in turn paved the way for racism and xenophobia.

"Whatever powers are behind this assault, they have exerted an effort to sow seeds of a new cultural conflict," he added.

In his address to Turkish ambassadors, Davutoğlu said he wanted them to not lose their will under the effect of any propaganda against Turkey and Islam.

The premier also called on the ambassadors to mobilize and act in solidarity against attempts to manipulate the public opinion after the Paris attack "as dignified and honorable representatives of rising power Turkey who speak our world vision."

He also emphasized that Turkey owes its persistence and sustainability to three constants: its history, geography and cultural identity.

"The political stability and the continuity of the state matter. We have a vision amid this continuity and change. You must have a constant, but your point of view and interpretation must be dynamic," Davutoğlu said.

The French magazine Charlie Hebdo sparked controversy in 2006 and 2012 when it published cartoons of Prophet Mohammed that many Muslims globally deemed blasphemous.